Today started off with a tea noir, and over hearing a conversation between a Brit and a Dane (wearing green Arab headgear) discussing the important points of philosophy, specifically that suicide is really the only subject worth discussing. Joined in the debate and got around to the need for people to feel society around them (the village) in an increasingly rationalised world, something I’ve mentioned before. 30 minutes of polite conversation and some interesting views. The three of us were very much in agreement, in particular on the view that many people are sleepwalking through life, with primary concerns around survival and the needs of living in the modern world being paramount. 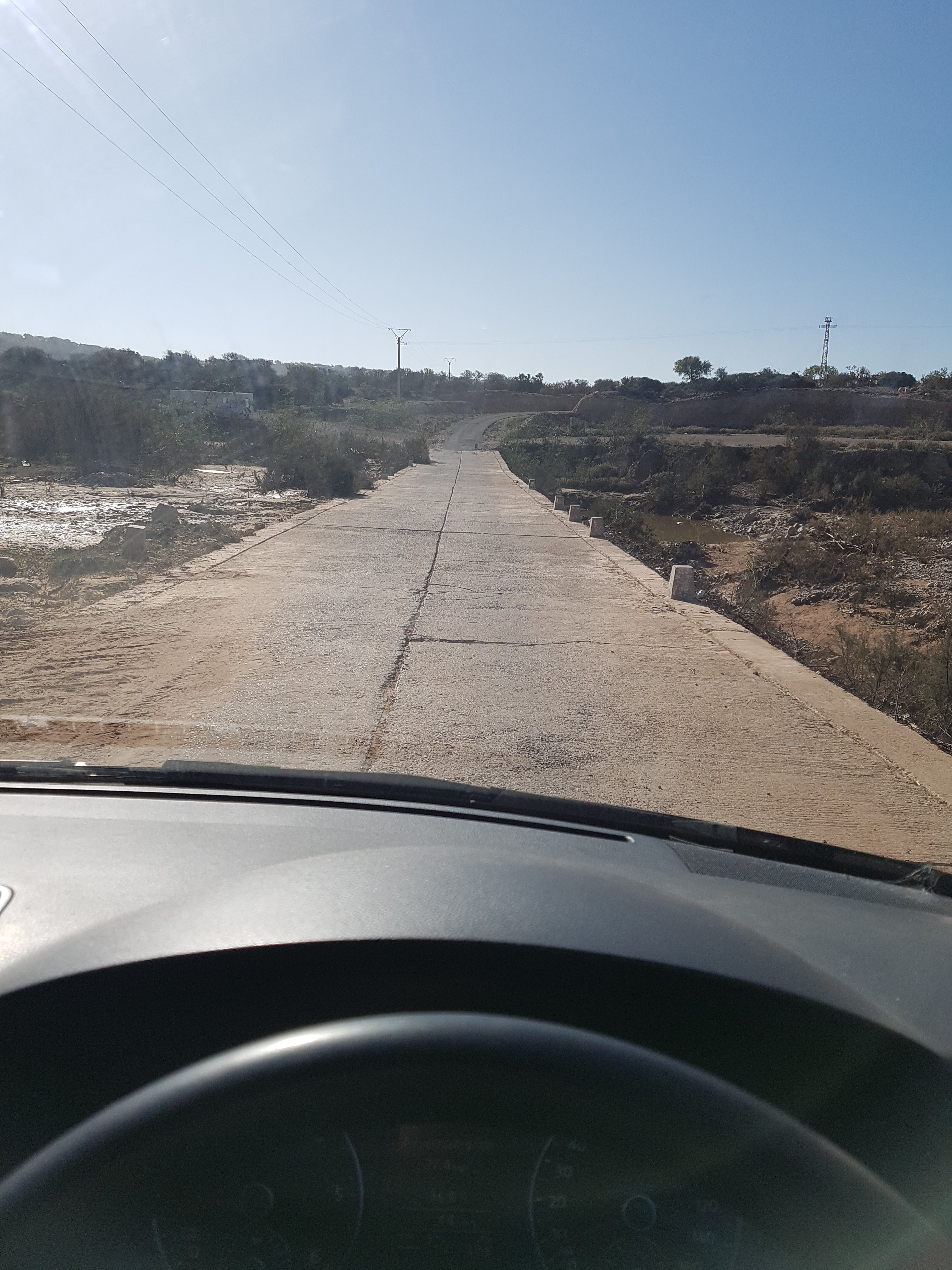 From Sidi Kaouki back round to the N1 the road crosses a couple of Oueds with bridges that have seen better days. The minor roads are well surfaced (when done) if a little narrow.

Sidi Kaouki is indeed a pretty chilled place and if you compare if with Taghazout down the cost you can really see why. Agadir has spread north and a new bypass road for what once was a fishing village, come surfing mecca has probably gone. Pretty sure the surfing is still good and it looked good to me (clean water, clean breaks and good height of surf even on a calm day) but like Newquay; it’s a bit commercial. The primary purpose for the new road it seems is to allow for some massive develop to happen (Taghazout Bay) with identikit holiday homes covering the hillside. This looks likely to increase given the additional car parks and roads that have been built for the next phase of houses. 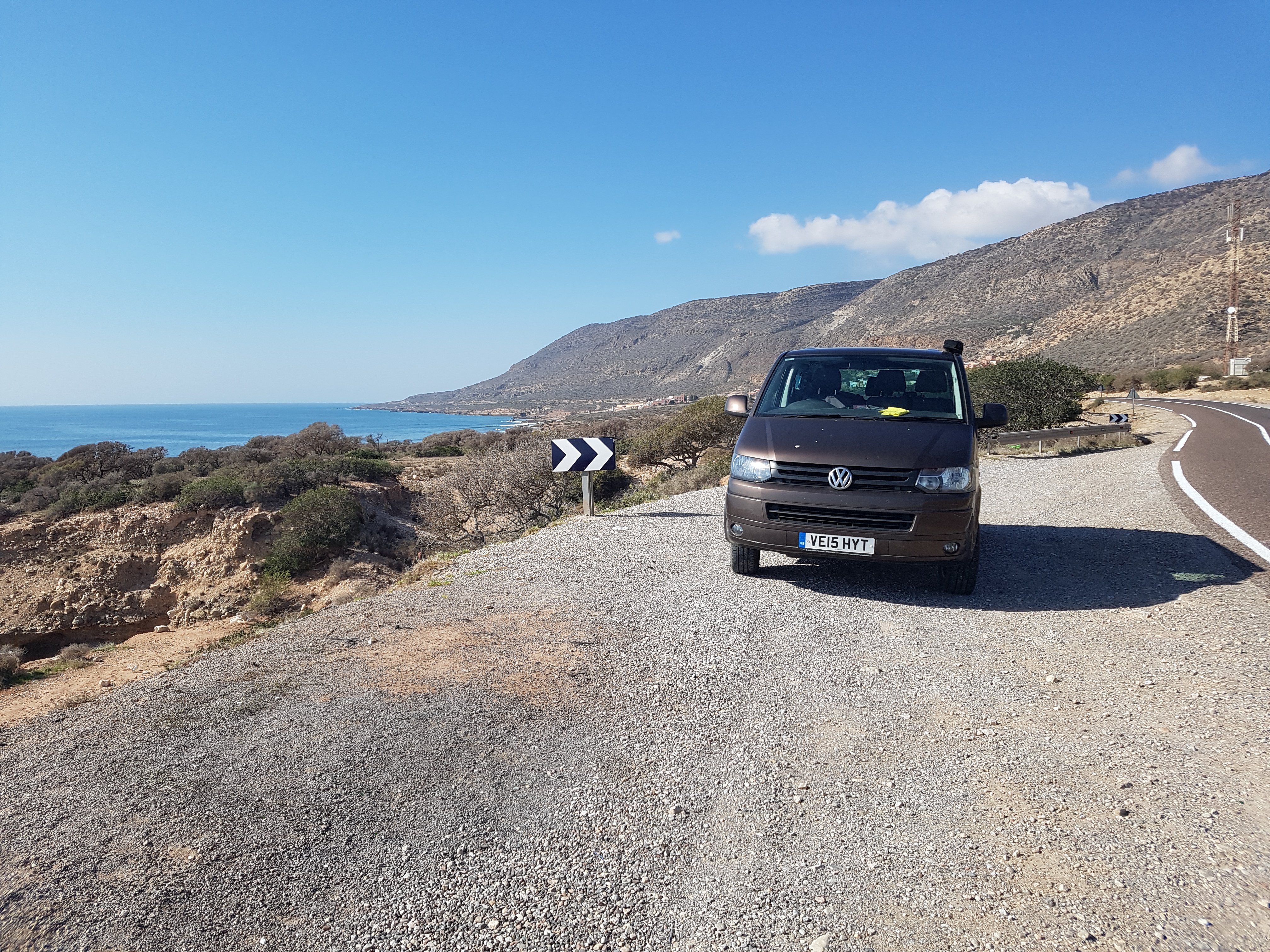 The N1 going south towards Targhazout. The N1 runs the length of the country and this section between Essaouira and Agadir is scenic but slow going. The A7 peage from Marrakesh is the fast way south.

This is also snowbird territory, even more so than Essaouira, with lots of large
camper vans down for 3 months. They’re mainly French, but plenty of Germans, Swiss, Belgians and the odd British van thrown in. Pretty sure it’s going to get even busier after Christmas this far south and the campsite I’ve ended up in, Terre d’Ocean just north of Taghazout is going to be full from later next week. People are here for the long haul and if you’ve retired and want to avoid the cold weather, then this is the place. 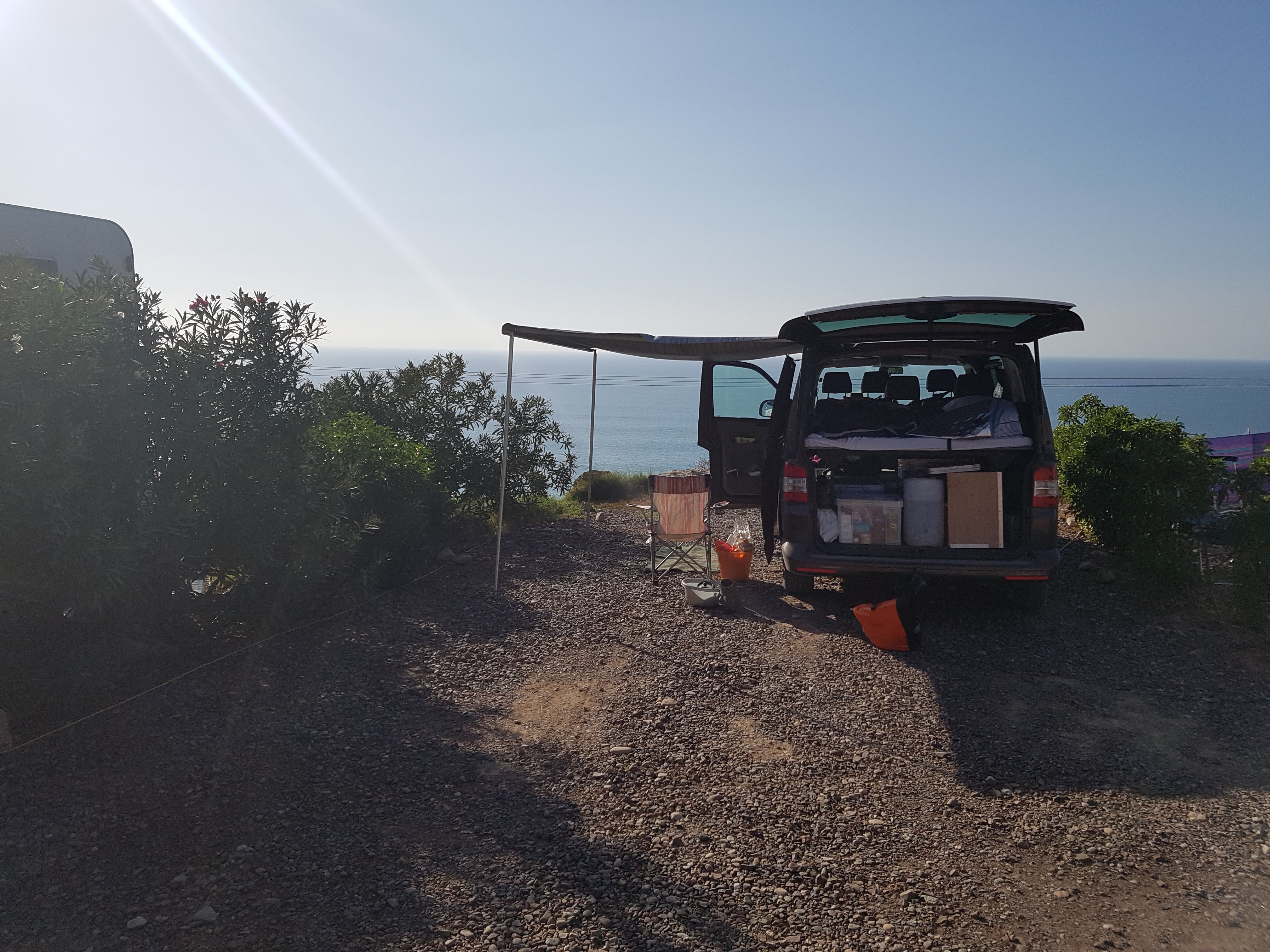 The campsite view isn’t bad and cost 80 dirham which is about £6.50. Is It why I came to Morocco though?

One of the British camper van people I met on the campsite in Essaouira commented that she thought that the French still though they ran Morocco and for sure, its still a francophile nation that’s been independent only since 1956. However, on the couple of lifts I’ve given to people, both younger guys, they’ve been keen to speak their limited english with me. 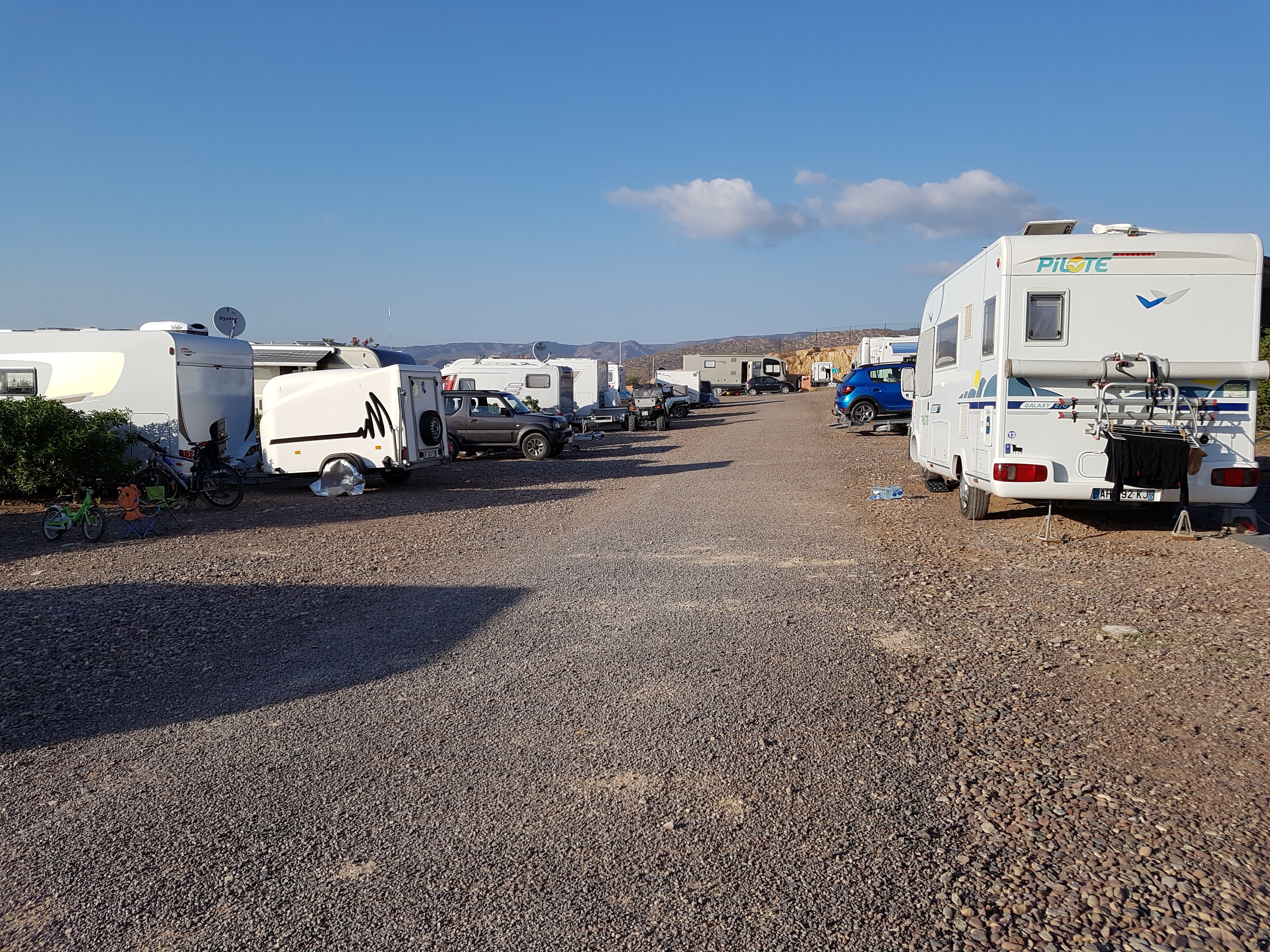 The Terre d’Ocean campsite. Big campers with snowbirds from across Europe.

I’m sitting here writing this now, it’s 19h00 and the campsite is dark and quiet, and just like a motocross meeting with campers, people tend to disappear into them early. True, its the shortest day of the year here (as elsewhere) so it is going to prompt people to hide away. It’s also not too warm once the sun goes down and a nice 18-21 C during the day falls away as a clear sky stretches out across the Atlantic. I’ll be spending the evening reading and one of the reasons I came away was to do exactly that; spend time on my own, and getting time to read and think in the evening. As I’ve mentioned, perhaps too much time thinking. 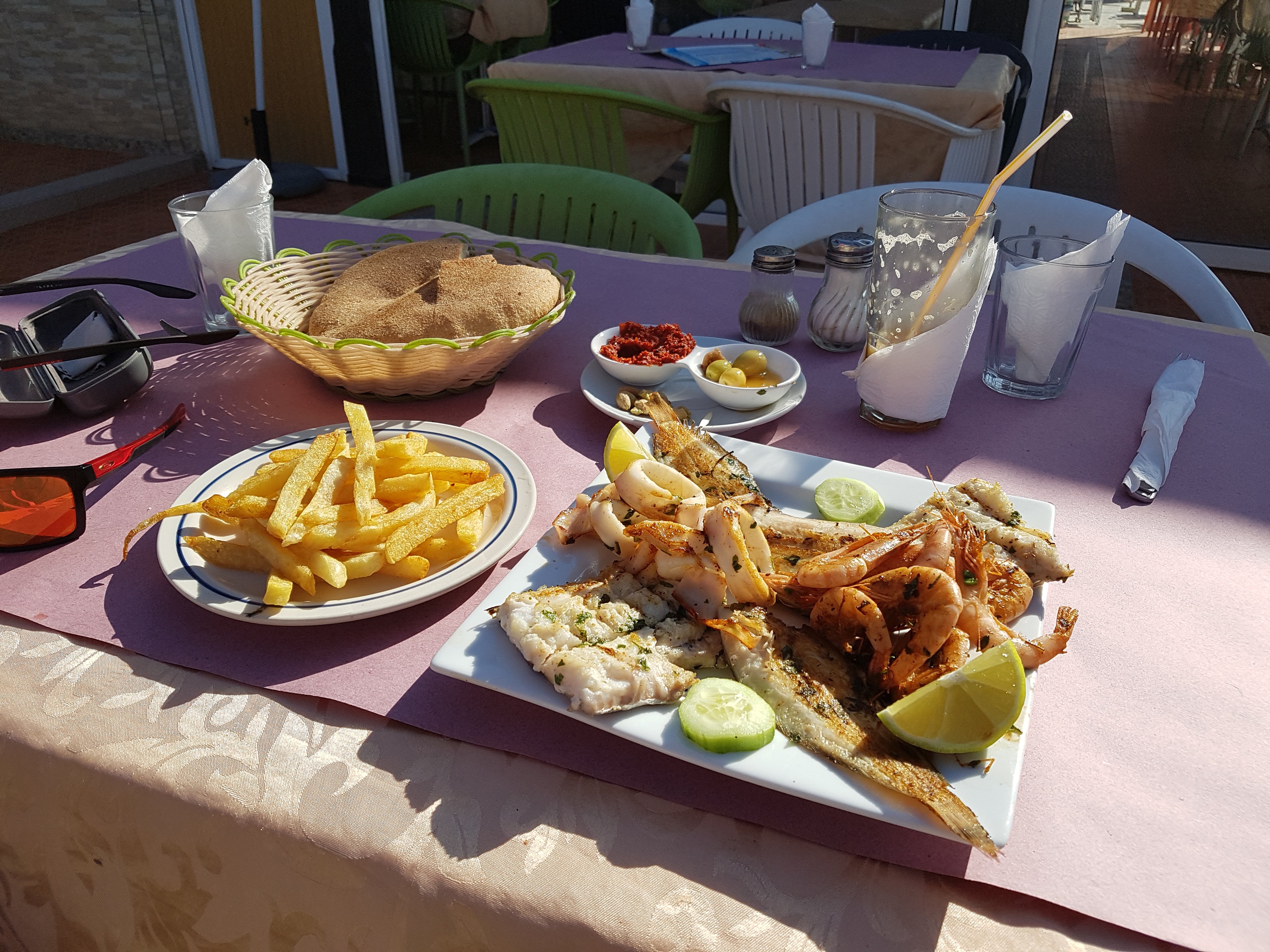 A good lunch at a beach restaurant is good value. £5 for the mixed grilled fish

Anyway the trip down the coast has made me realise that I need to leave to it and head inland a bit, and will head to a couple of different places in the Anti-Atlas for the next week or so, potentially towards Taroudant and then Tafraout. Distance wise not too far, but the as today has highlighted, it can be slow progress given the twisty nature of the roads. I’ve booked a recommended hotel in Taroudant for a couple of nights so looking forward to that. 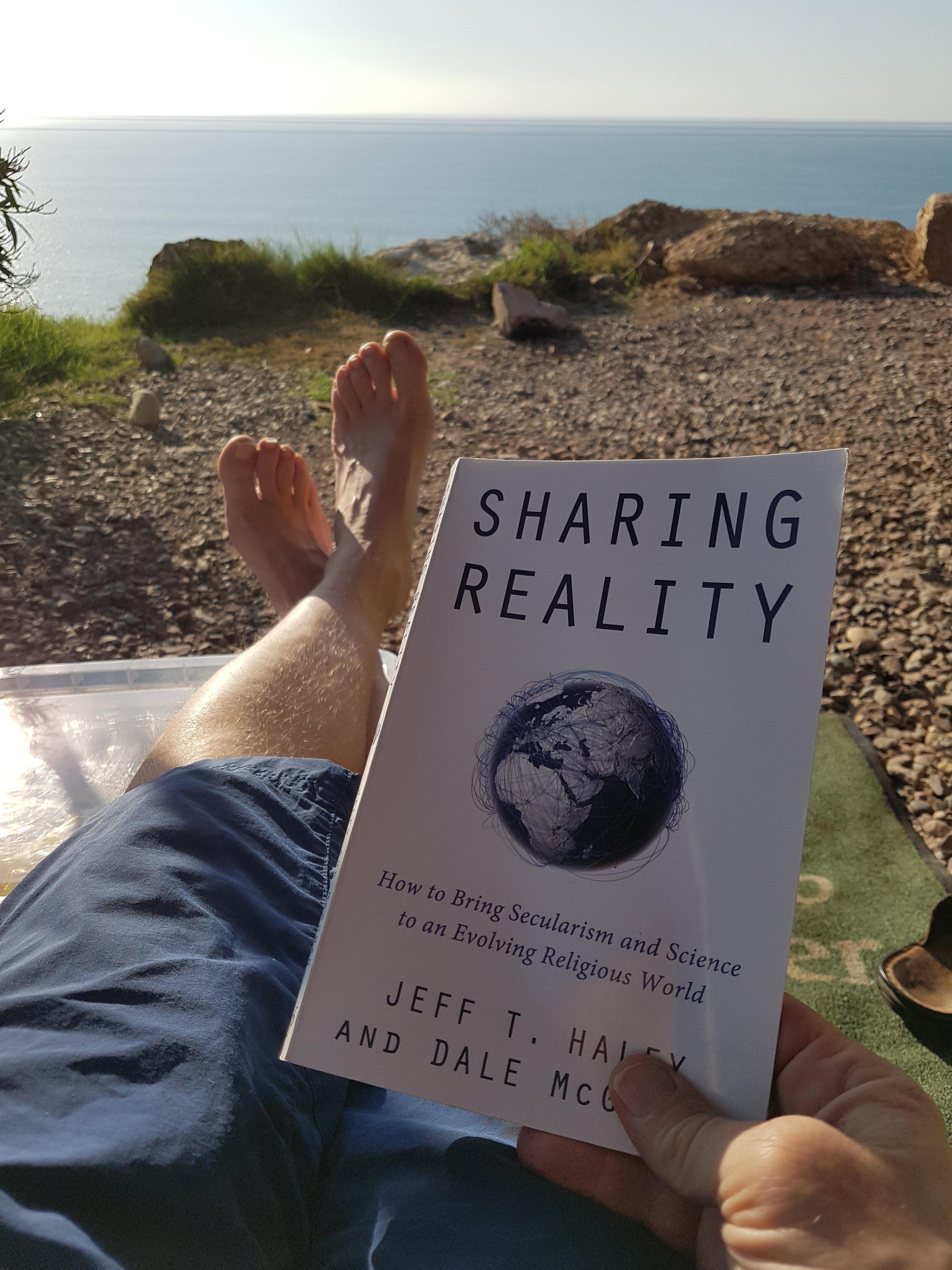 This afternoon’s reading has been Sharing Reality, by Jeff Haley and Dale McGowan, which discusses how secularism and science should be introduced and made part of the evolving religions of the world. Separation of state and religion is of course key, but they make an interesting point early on (using Dawkins as an example). In the same way someone pushes their religious views towards you, you in turn push a secular or scientific narrative then of course they are likely to reject it. Dawkins, whilst a hero to those of a science viewpoint (me included), is hard to digest to people of a religious nature. He’s confrontational for sure and the need to make his message more palatable is going to be key for him to be more widely understood.

I’m only 50 pages in, and its the reading I have planned for the rest of the evening, but shows some promise.