What was going to be a relatively quiet day has turned out to be pretty busy, with Taroudant proving to me a typical south Moroccan town.

But of course that’s the plain version for the diary. The more interesting click bait version of the day would be:

Lists aren’t good always and are the bain of clickbait.

The walls of Taroudant

Further discussions with the owner of the Chambres d’Hote Said (will work out the correct spelling) over breakfast and ended up walking into town to find the local womens cooperative for Argan oil production. I’d already picked up a bottle in Essaouira but you can’t get enough of it on salad and couscous so bought another half litre. This stuff is award winning at Meknes for the last three years. It’s amazing how good Berbers are at english when there’s something to sell. 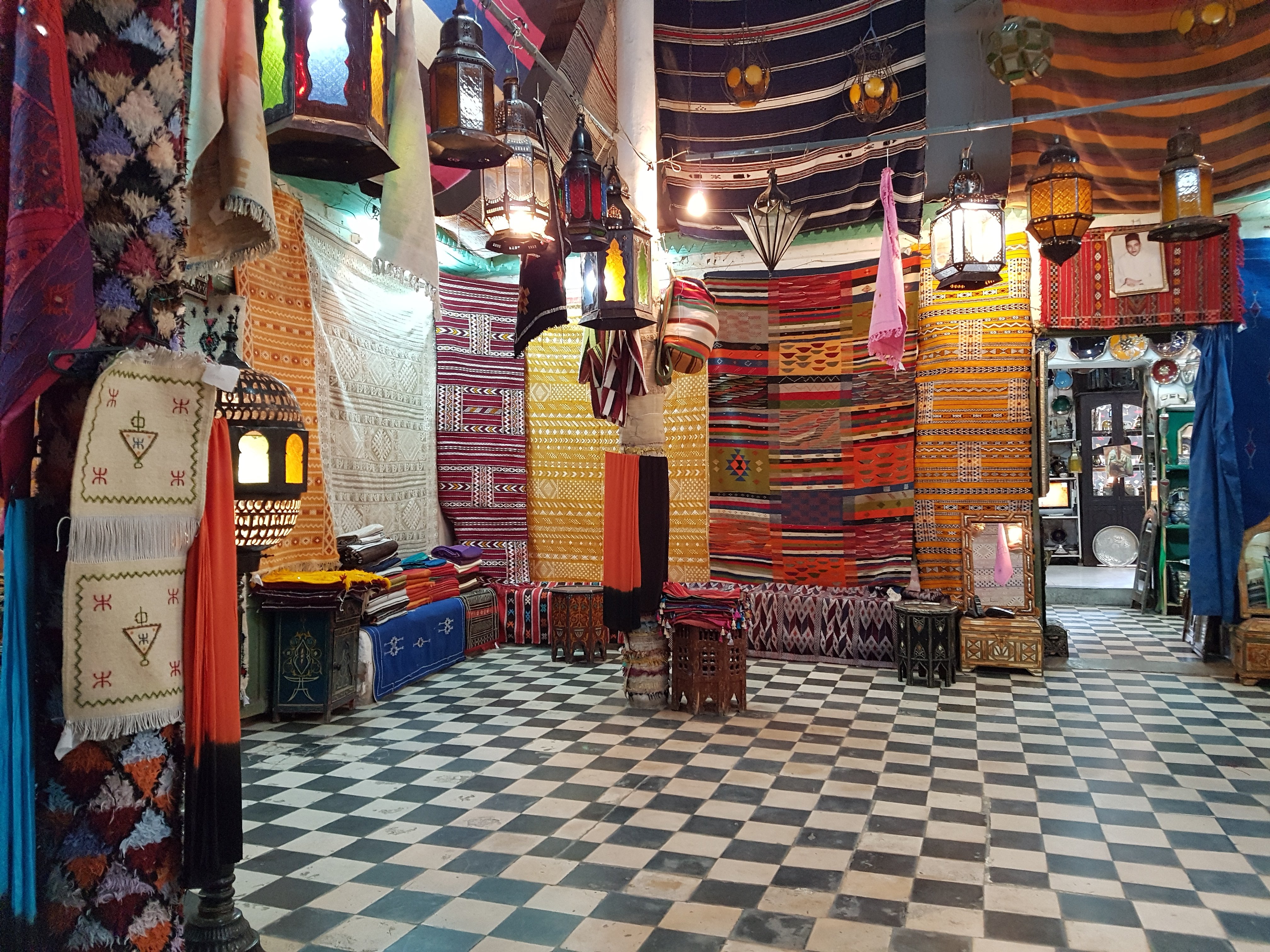 Then went with Said over to the Maison Berber where they do buying trips into the villages and then resell (for a profit of course) though given the lack of tourists it’s a hard slog. Went in looking for records and came out buying carpets and depending if my route comes back this way with Tamara next week there might be a return visit.

Went for two local Berber designs from the nearby Atlas mountains rather than the Tuareg ones from further south and east. The latter ones were more colourful but the quality not so good. Needless to say if you are buying a gourd or buying a carpet the process is the same. They eventually name a price, after tea and about an hour and being shown 20 or more carpets of different colours and size as they work out your taste and budget. 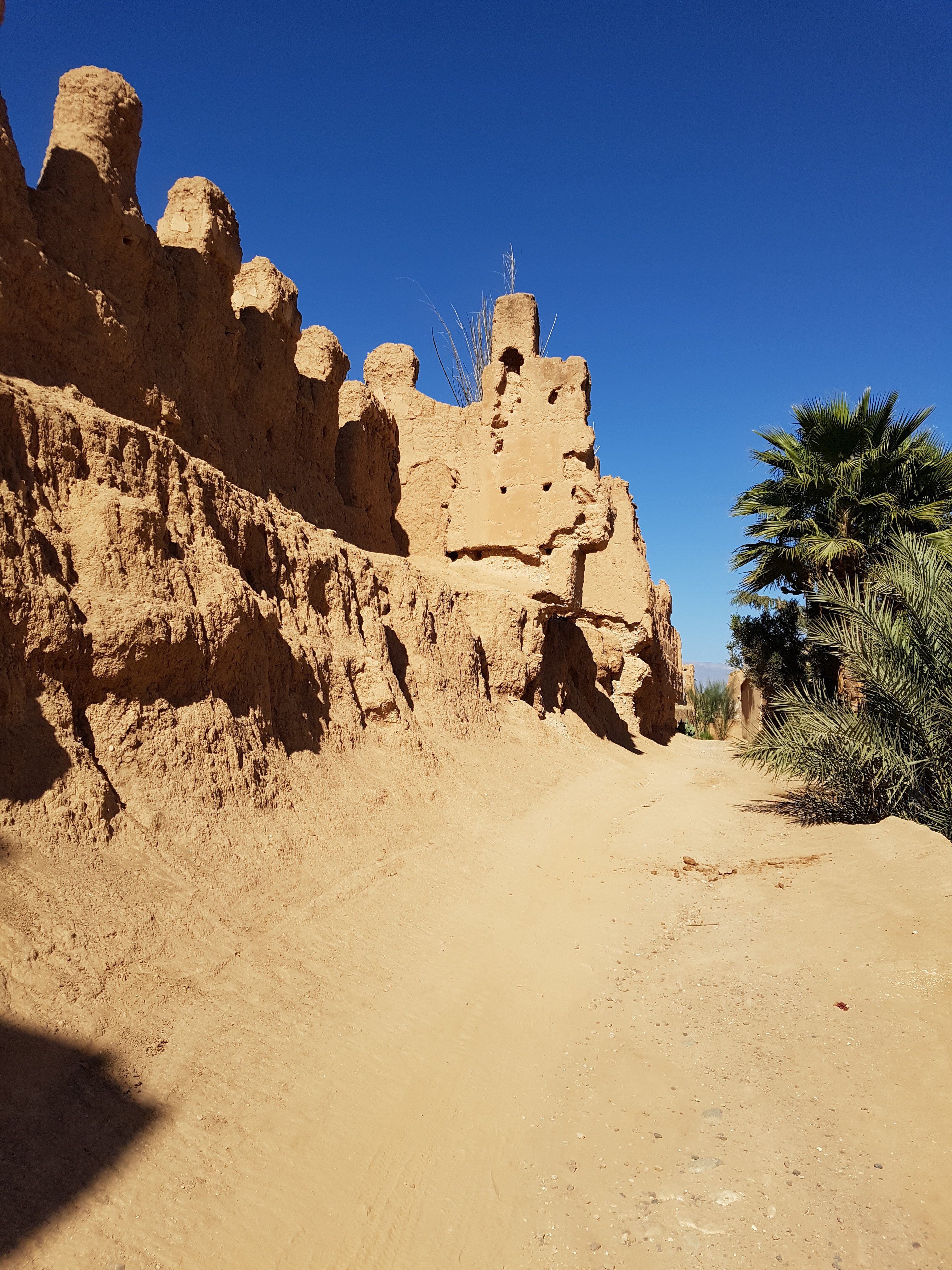 The process involved 4 sales guys and in a software or technical sales company these were the Pre Sales, The Salesman and the Sales Manager. Also was the Inside Sales person who makes sure the carpets kept coming and had an idea on what stock was in the shop that may form part of a deal. The Pre Sales guy, spoke good english and gave an overview of the different Berber carpet types (there are 3, one from the mountains, one from the desert and 1 cheap crap made in factories) , how they sourced them and a general view of the business. You get seated in a nice big room with carpets all around and they carpets starting getting stacked up. You choose the 3 to 4 you like the most and as you do, the Salesman walks in, good english again, older guy and this is the closer. You select the one carpet, more tea and then finally he puts a price onto a large calculator (in euros, less digits than dirham, and it’s divide by 10 basically). What price to I want to pay, of course 50% of what he wants and after some sucking through teeth you end up with a price that is 75% of the original asking price.

Once the price was agreed, as if by magic the Sales Manager appears (who doesn’t been english too well, we go back into dirhams, the card machine arrives and the carpets are stitched in a bag before you can say “on second thoughts…”. All good fun and ended up with two nice carpets. 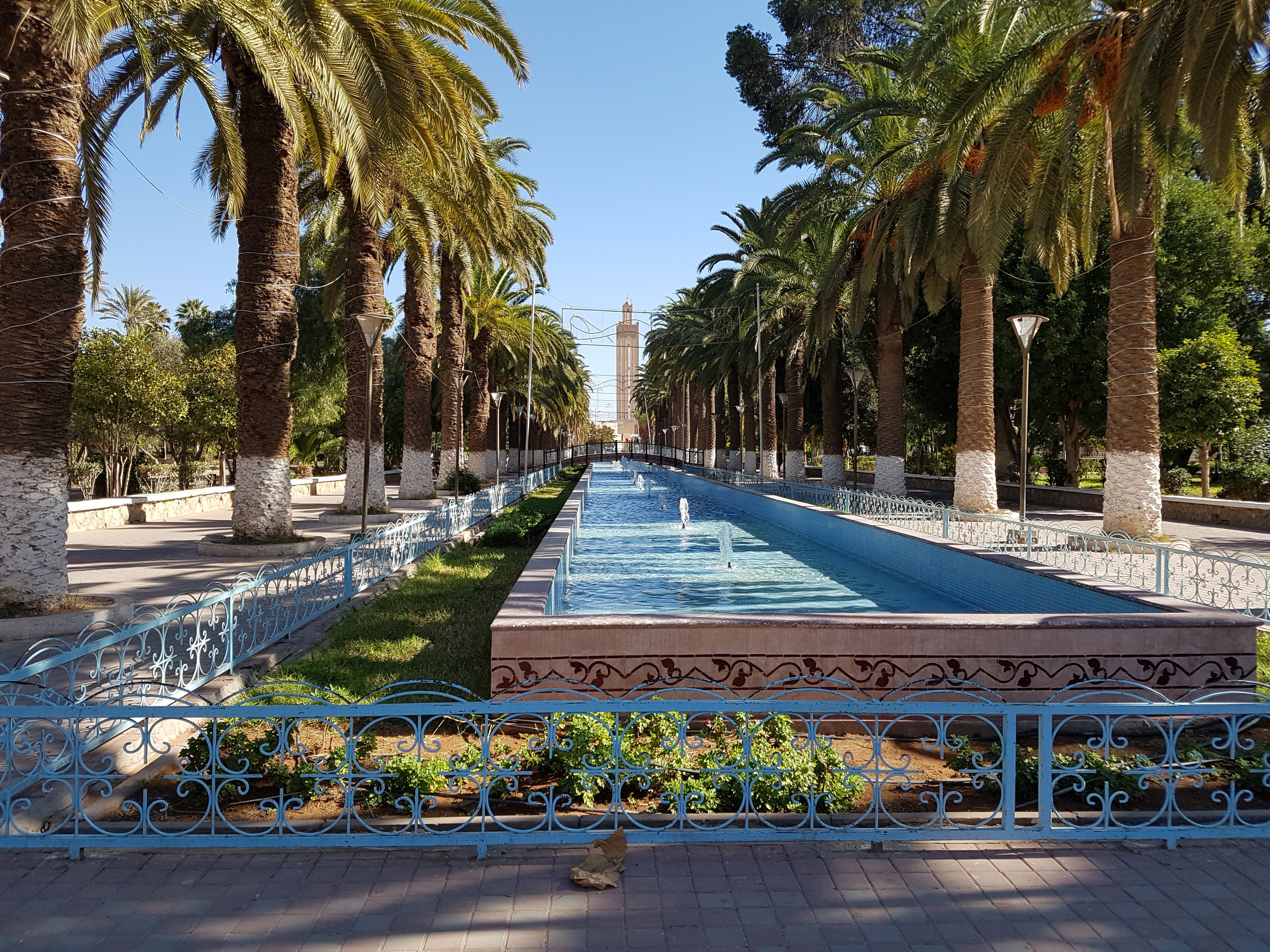 Coming out of the shop, with the wrapped carpets, got quickly approached by a ‘faux guide’ who’d I’d picked up on hassling a French family into a restaurant the previous evening. Ignoring him, his wing main tried to engage in conversation, in French, which ignored him, but took a good 100m of fast walking to do so. Having lunch later on, after a cycle tour or the walls, saw the guy in action as a bus of tourists turned up from Agadir. Again difficult to shake him off but in a way you need to humour this guy to and tell him to piss off when needed. Being in Taroudant for a couple of days you tend to see how things begin to roll and speaking with Said later, he mentioned this guy has dropped his name to get 2 of the guests at the hotel to buy stuff, saying that he worked in the kitchen here. It’s the bit of Morocco that people don’t like and you just need to have some resilience and also roll with it as it happens.

Some guitar in the sun of the hotel terrace before a cycle tour of the town walls, which at 7km for the circuit is pretty impressive. The west of the city is pretty modern and includes a near water feature, not what I was expecting. A soul French camper van was sited in the parking area, again proof of how the town isn’t really on the tourist map. 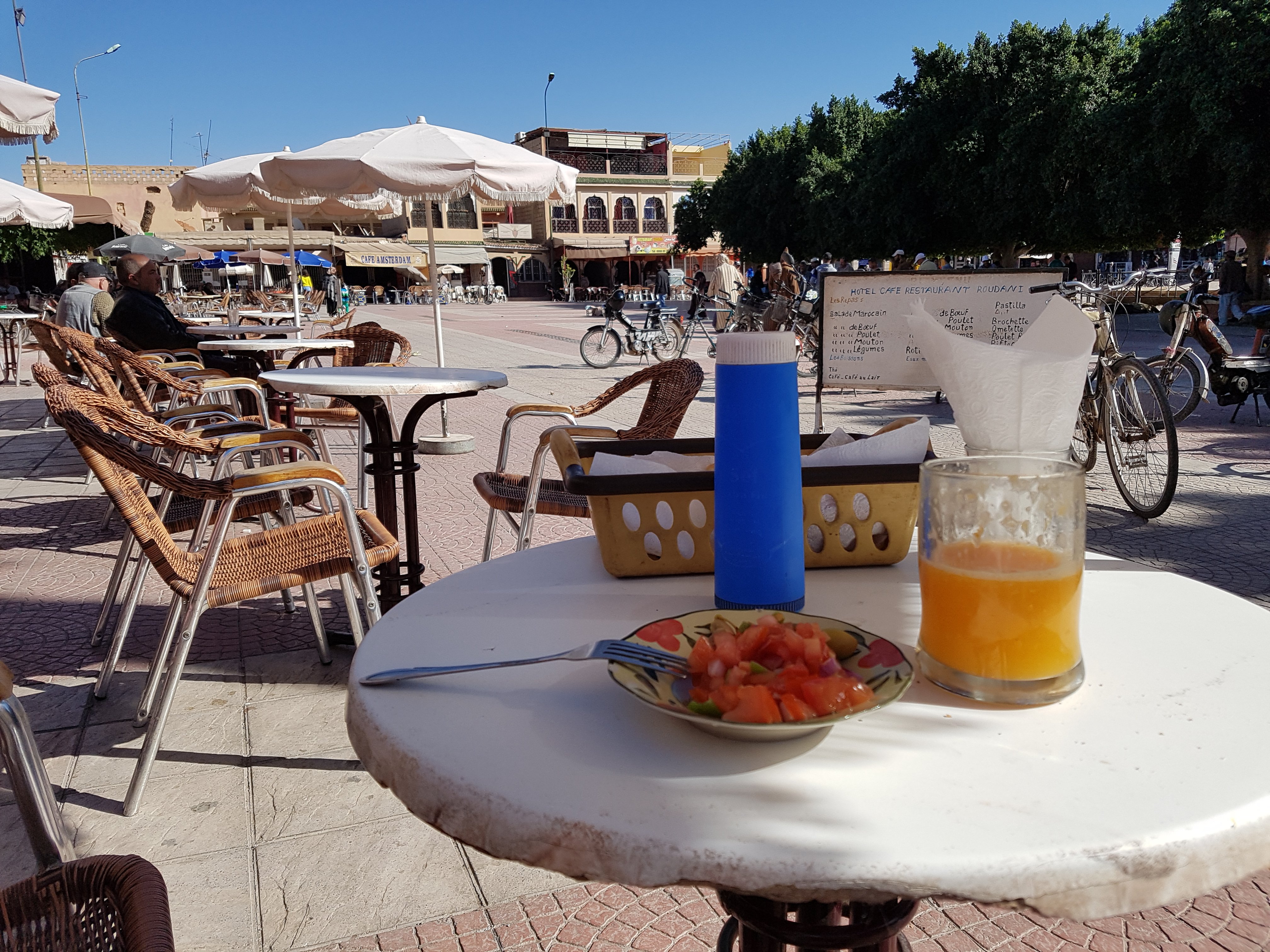 Couldn’t find a car foot pump anywhere, which was a bit odd given the garages, mechanics etc around town, but did pick up some veg for the next few days as planning to head to Tafroute tomorrow, via the kasbah and palmery at Tioute. 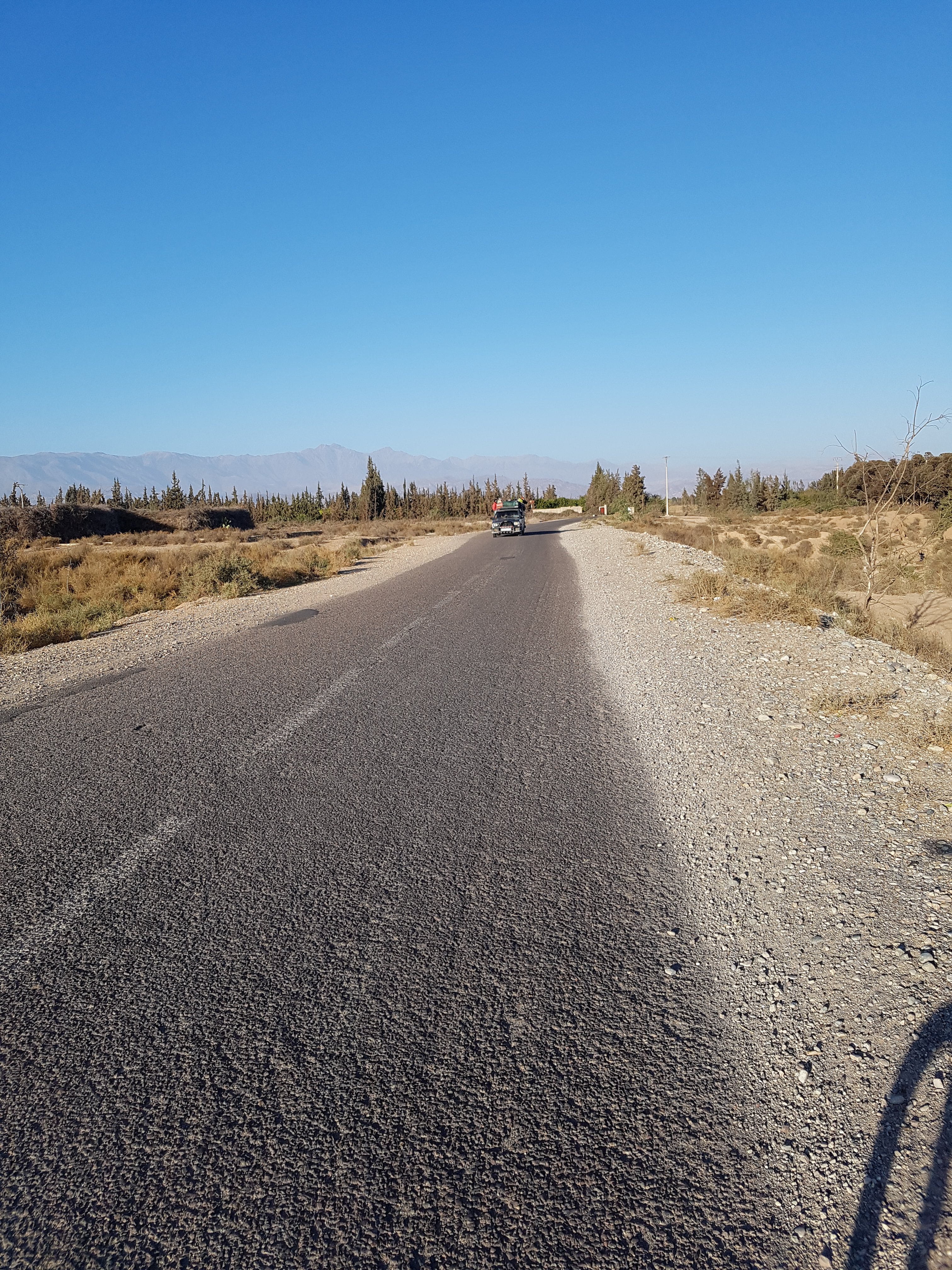 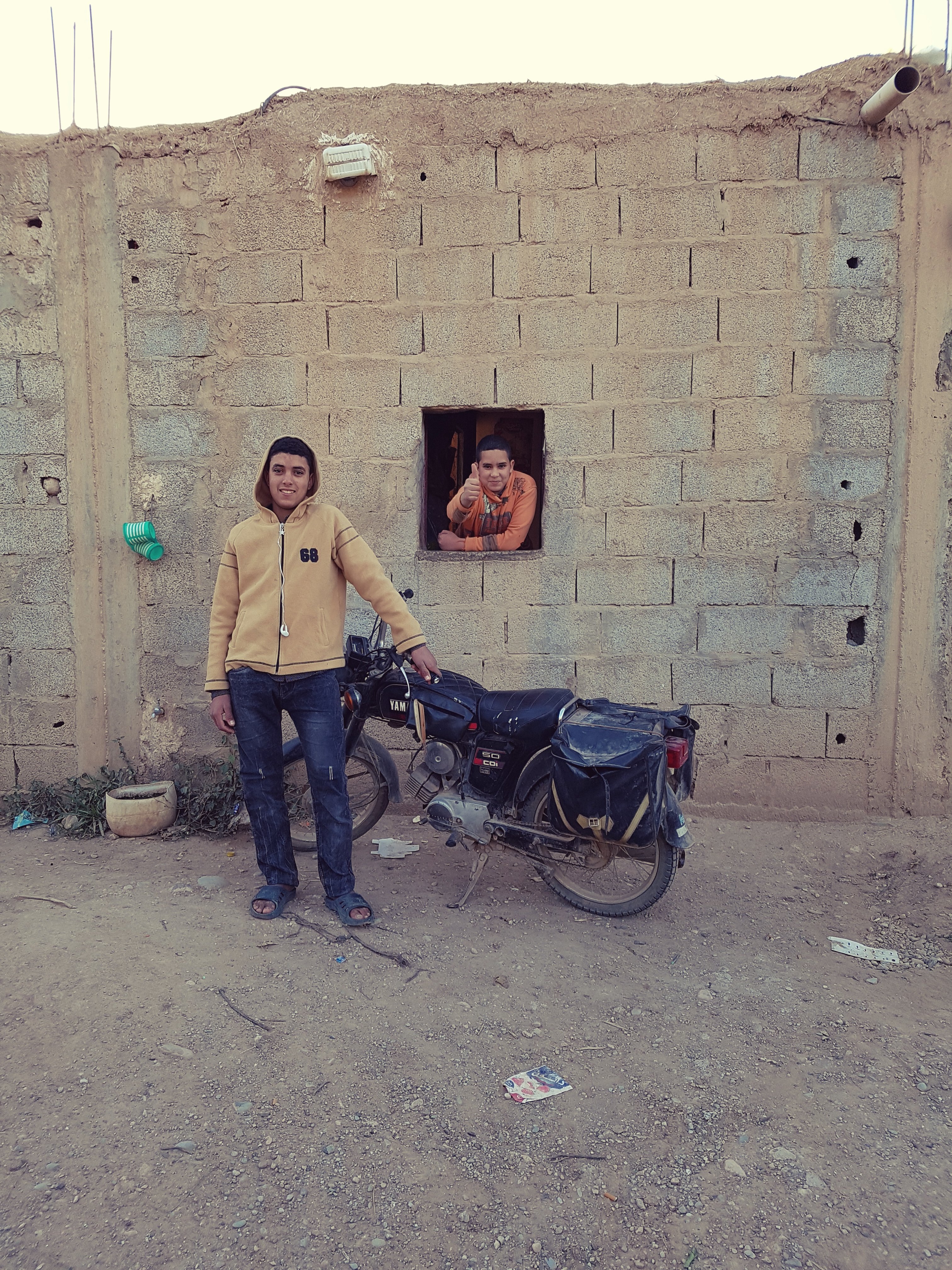 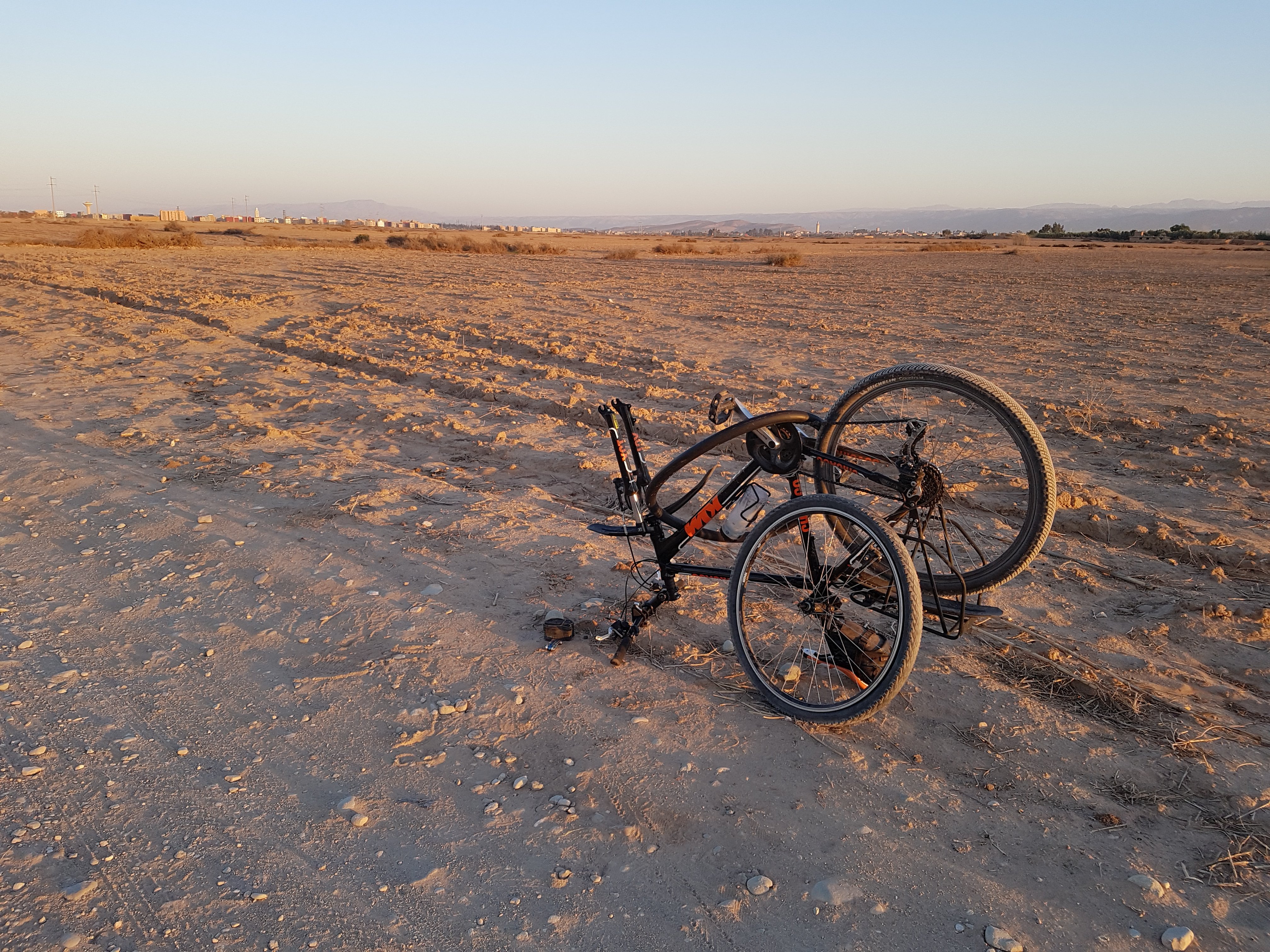 ent out for a longer cycle, out through the banana groves, orange tree plantations and litter that sounds Taroudant. Tried to do a circuit, but ended up have to double back at one point but good conversation in poor french with an older guy and another attempt to buy a Yamaha FS1E. In sight of Taroudant I picked up a puncture from one of the big thorns used for hedging. All good and a steadily done repair with a new tube was executed, something I’d had problems with earlier in the year.

Read not much today, so plenty still to write up, but tomorrow is indeed another day.