“Is that your parcel on the road ?” 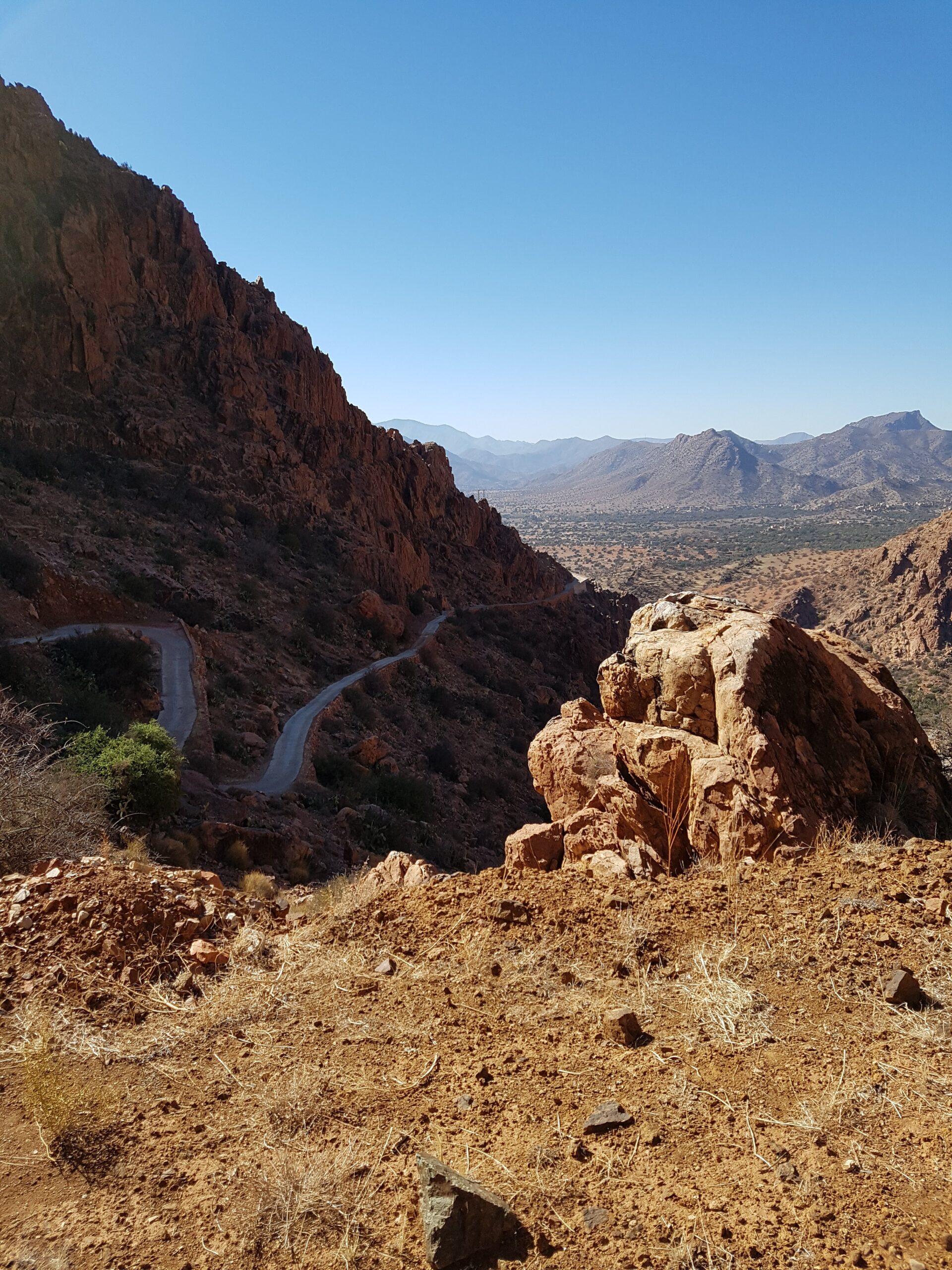 Today was a cycling day and another day in Tafraout and vicinity. It was cold last night with the temperature dropping below freezing (according to Google but more accurately according to my windscreen which was frozen). Slept okay until about 6gam and it was cold then. Given the altitude here (about 1000m or about the same height as Snowdon) it’s warm enough in the day but not stunning. T-shirt for cycling up hill 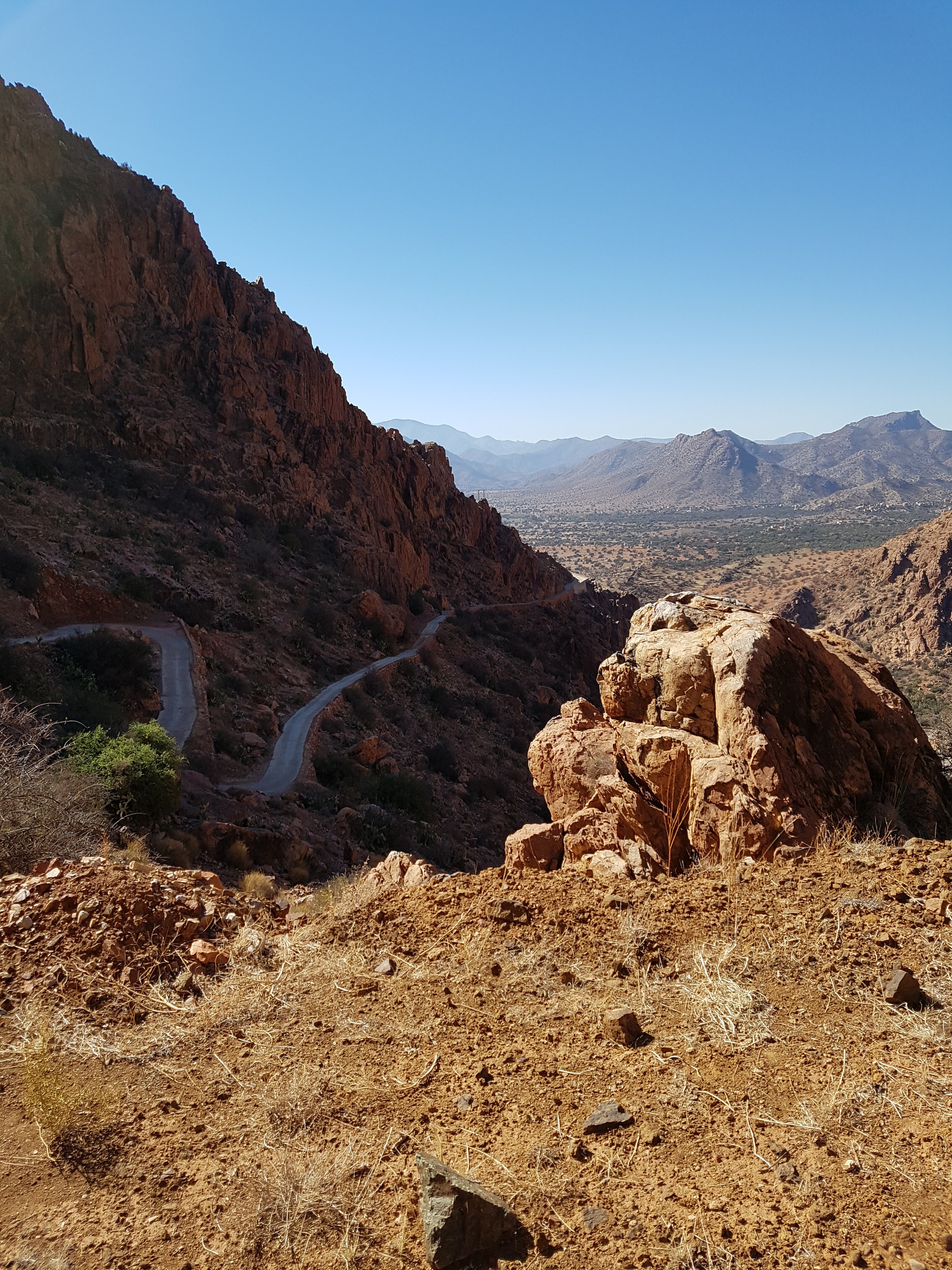 but not downhill. Today was a cycling tour of the Ameln Valley and reading one of my favourite books,The Third Policeman. [1] The cycling was good although relatively strenuous given the Ameln Valley is backed by the long ridge of Jebel el Kest and my plan was to get up to one of the higher villages Tagdicht which was at 1400m. The road was impressive and was glad on the bike as it would have been a bit nervy in places in the van. Watched one the locals come down in ubiquitous Dacia and he was taking it steady. Given the roads in the area and that there is no form of vehicle inspection or MOT you do wonder how many cars and their occupants plunge off the edge. 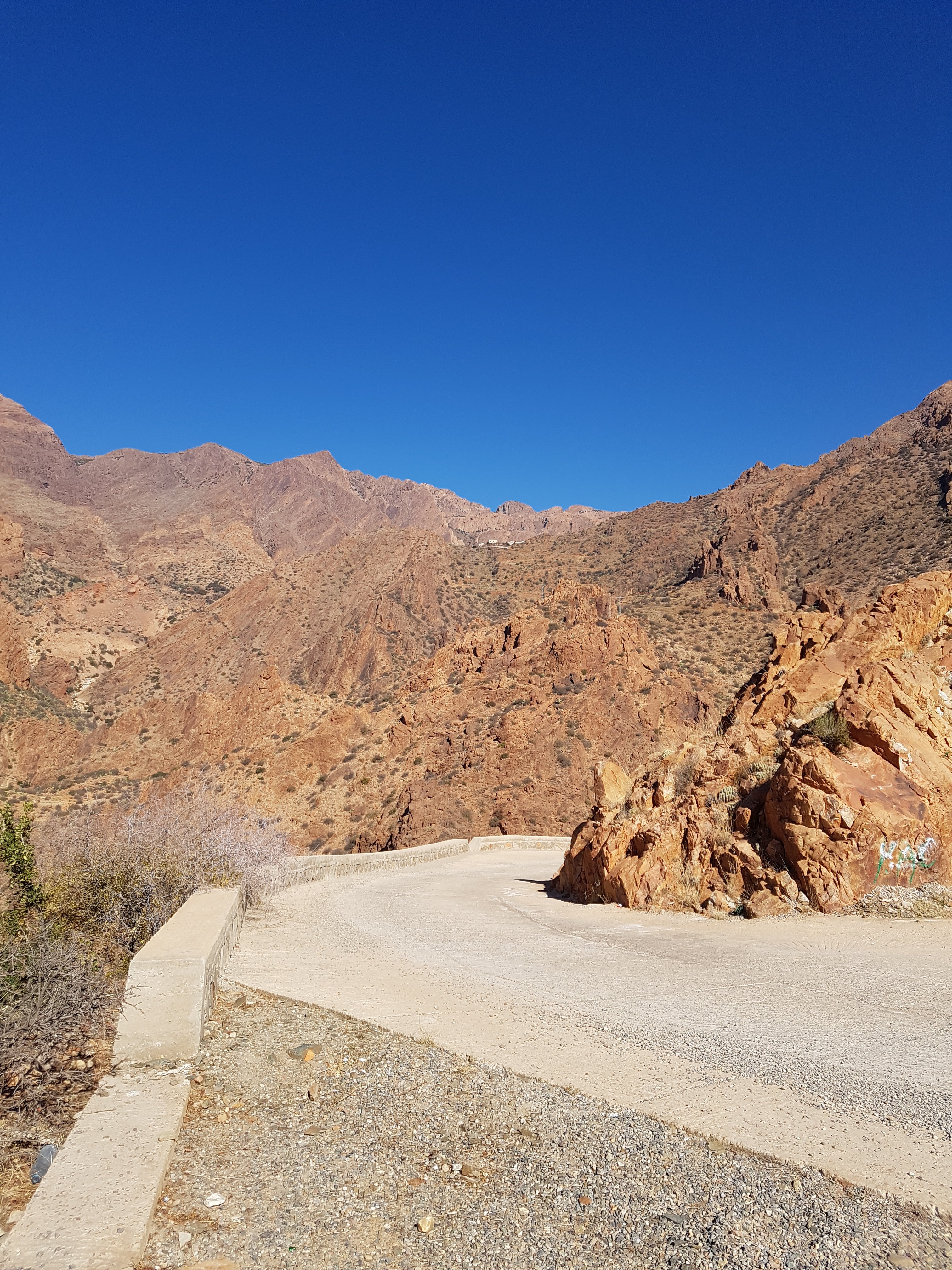 My legs were gone with 200m of ascent to do and I did the honourable thing of perching on a rock and reading my book. One the one hand it’s unsurprising that Brian O’Nolans book wasn’t published in 1939-40 when he wrote it (Flann O’Brien was one of his many pseudonames) as it’s well out there as a modernist work with some unique themes. However he’d already has At Swim Two Birds published which contains some interesting concepts. The book itself is an easy read, though the themes themselves are interesting and complex. An Atomic Theory (of men turning into bicycles and vice versa), commentary on the work of de Selby (one of the great fictional natural philosophers [2]) and a surreal theme on the circle of life (or death) are all in the book all with a main character who has no name (and he doesn’t even know it himself). A pleasant hour reading before taking 10 minutes descending carefully what it has taken me 45 minutes to ride up. Rim braked, my KTM citybike needed an adjustment half way down. Heading back up to Tafraout said hello to some walkers who turned out to be from Builth Wells and travelling on the buses having flown in Agadir earlier in the week. Talked a bit about Tarodaunt, Saed’s accommodation and the possible trekking on Sunday and Monday. Funny who you meet but now Christmas is done there seem to be a few tourists in town and will surely be the case in Morocco. 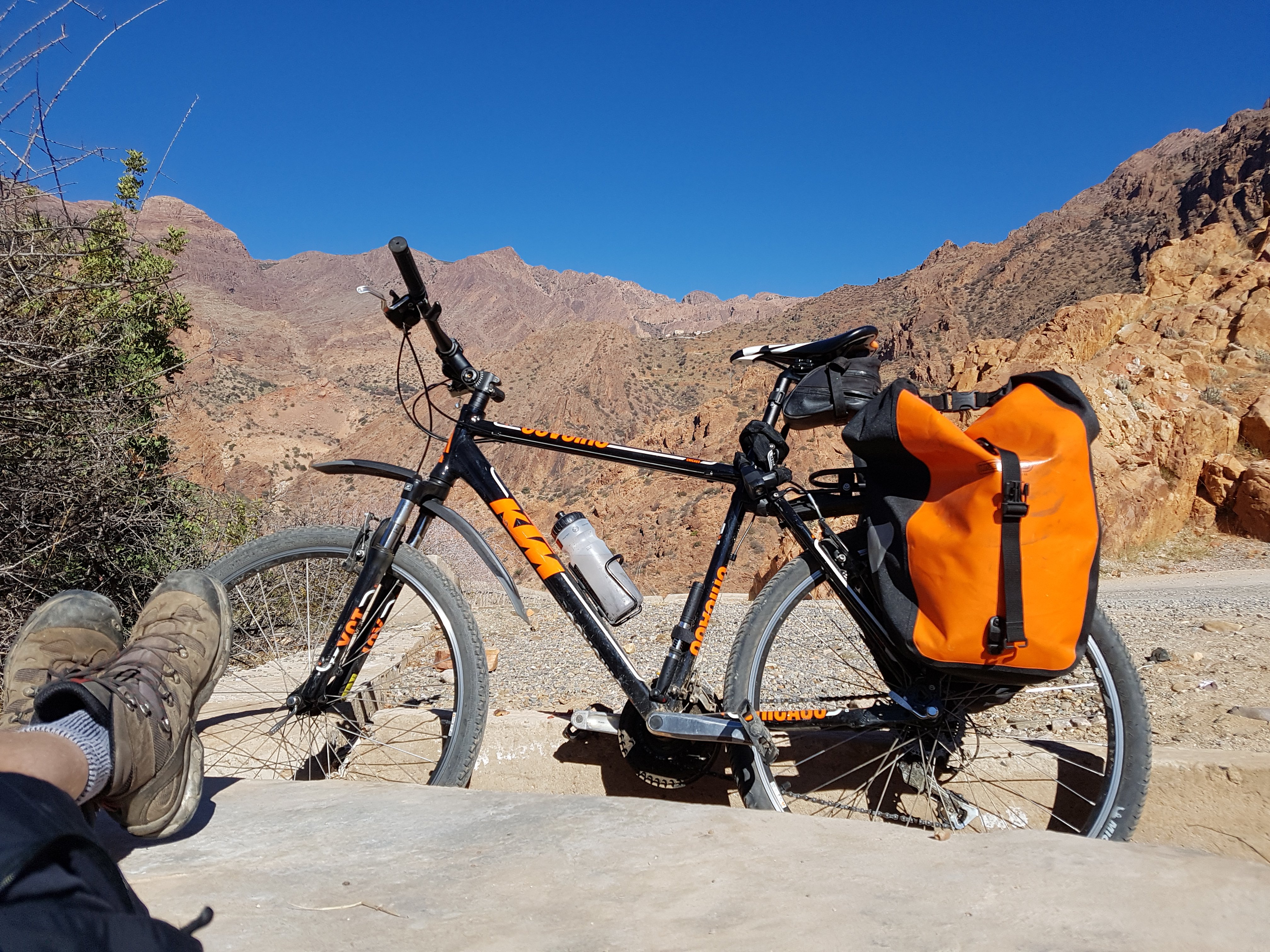 Tonight’s tagine was partaken at the campsite and good it was too, with a Moroccan salad. Along with a good hot shower (cost 60p) Camping Tazka is up there with the other site in town. The Camping Granite seems deserted and possibly shut even though it’s a bit nearer town than here. Some more cycling I think tomorrow as well as more Flann O’Brien and continue to work on the 2017 Classic MX Wales report which I had not done back in October. Friday will be Marrakesh and it’s about a 5 hour drive but only around 200 miles. Looking forward to picking up Tamara and the dynamic of the trip changes again. 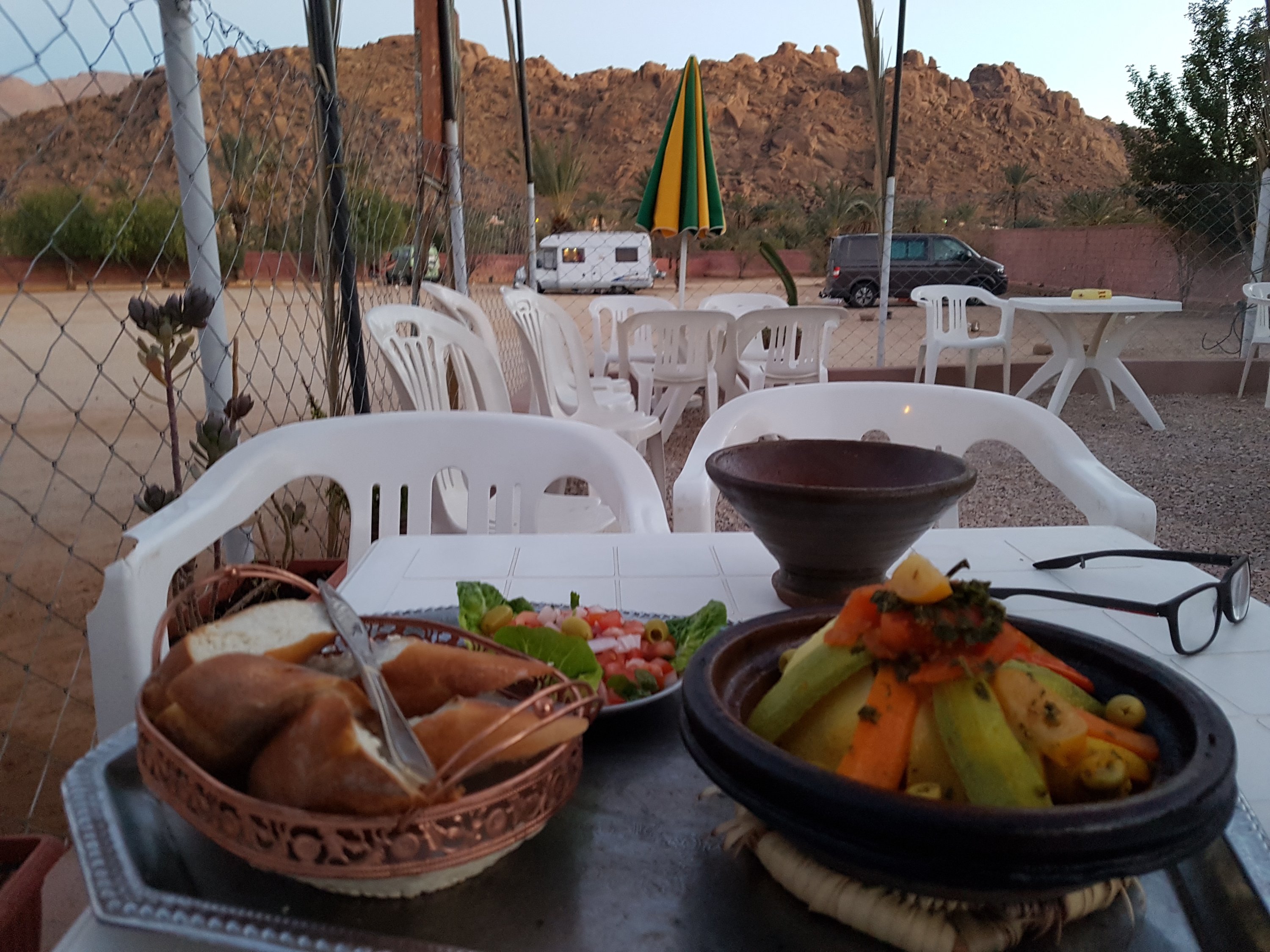 Sitting at a cafe coming back into town having some tea whilst watching another puncture deflate the rear tyre and got chatting a teacher who’d moved to Tafraout 20 years ago. He is a real convert to the place and bought my tea for me which was really nice of him. Worried about Brexit and the future of Wales, but also about the perception of Islamic countries and what might happen with tourism. The teacher also mention a famous British writer married a local Berber tribesman and now lives Tafraout some of time. I’d never heard if Jane Johnson but I have now. 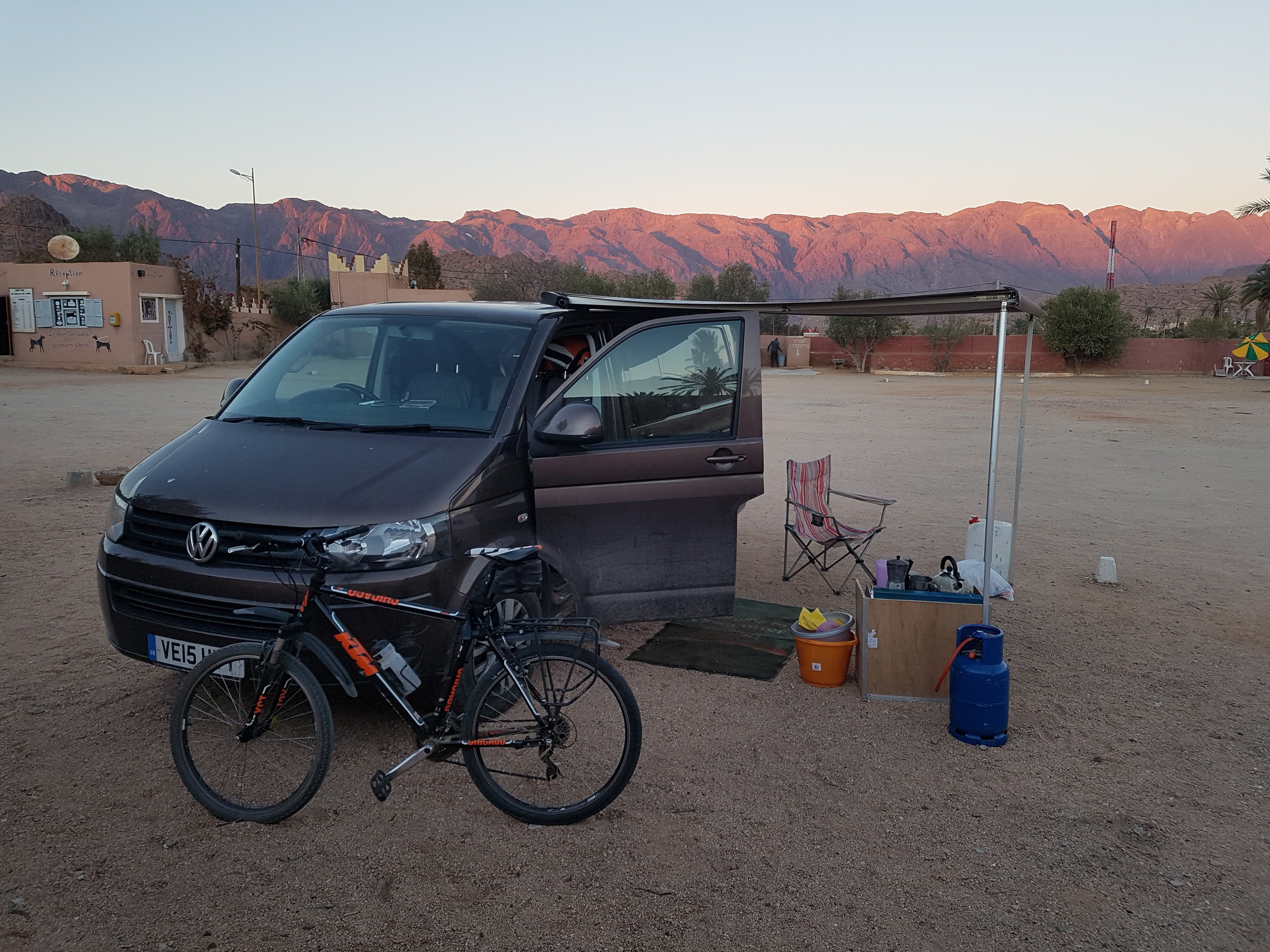 Camping Tazka: not too busy but better than the Trois Palmeries down the road

Also worked out that I’m spending over 12 hours a day in the back of the van. It’s good as I’m getting things done (like this blog) but anyone coming to Morocco might want to leave it to the spring as the whole place is quiet relatively early, especially when it’s cold. [1] By chance Cheryl indicated by the Book of Face about a possible John Cooper Clark gig in Cardigan in February and he has use quotes from The Third Policeman in his poem Ten Years In An Open Necked Shirt “What with the drink trade on its last legs and the land running fallow for the want of artificial manures”. 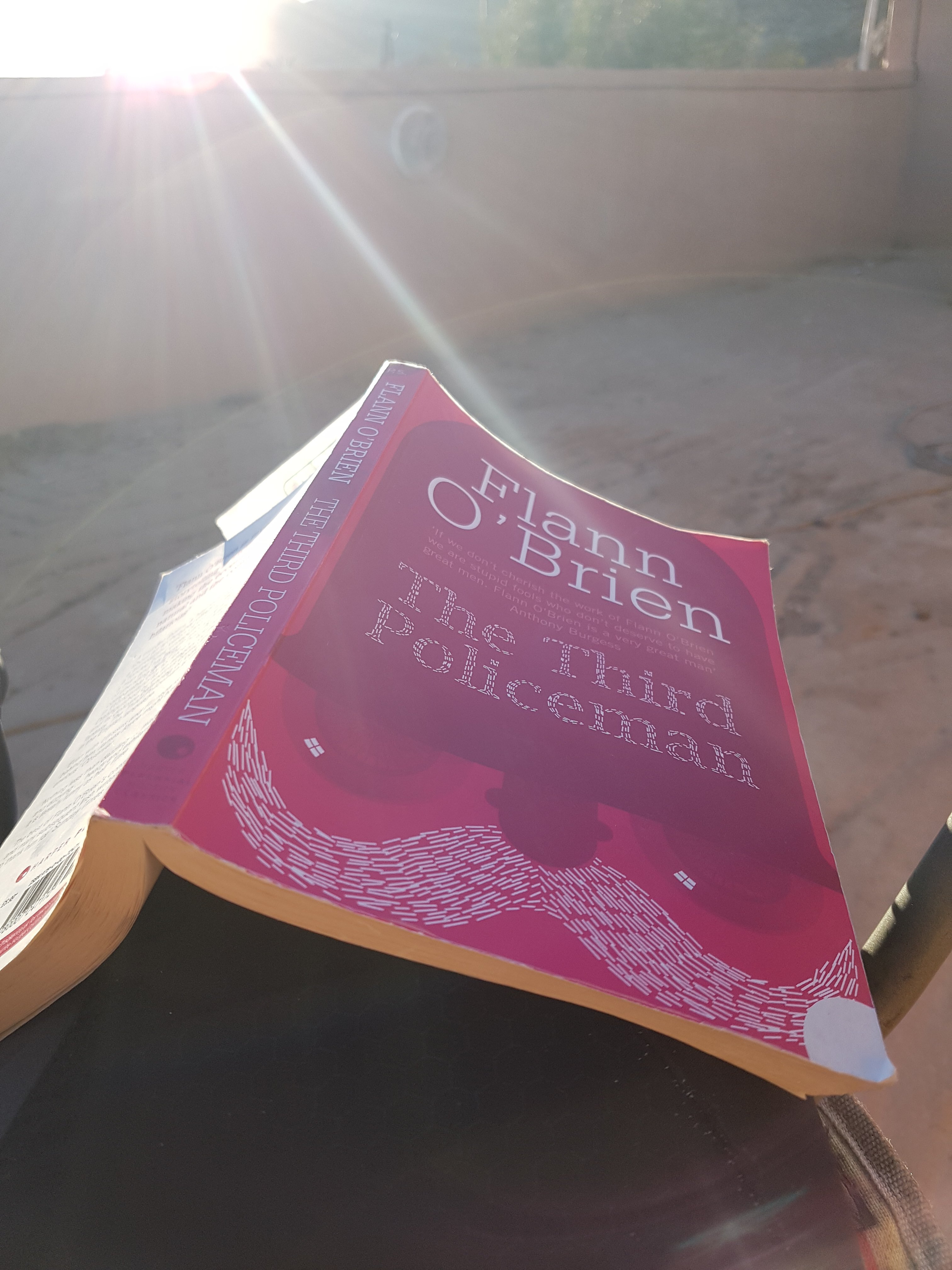 [2] de Selby has been studied at length by the main character and by great this is referring to his character rather than his achievements. O’Brien’s later work The Dalkey Archive focuses more on the great philosopher and contains a lot of the themes from the Third Policeman. Though it was published 25 years after The Third Policeman was written in 1964, The Dalkey Archive came out first. The Third Policeman was published after O’Nolans death in 1966. One of the main features of the book is the increasing length of the footnotes referring to de Selbys work and some of his interesting, but totally wrong, theories.