The van is packed and I’m on my way, sort of.  Not much packing and preparation time for a 4-5 week trip away to Morocco, but sort of ready to go. A nice grey and dull day in Bwlch but most things (I hope) in the van.  Before I get into the trip itself, a quick review of the van. 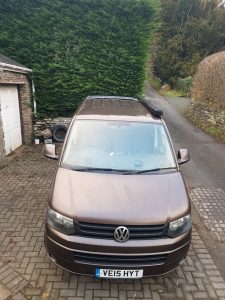 It’s still a van, rather than camper. You can still get a bike in the back of it. 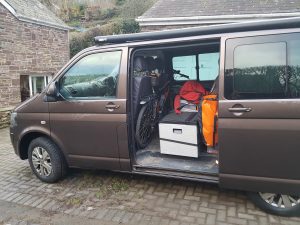 A larger than planned fridge, but a Black Friday with some Amazon gift cards (reward scheme from my employer, need a Red Hat sticker for it really). It’s a Dometic / Waeco cool box.  and runs on 12v/24v/240v and gas.

I also picked up a Fiamma F40 Van awning, specifically designed for the T5/T6, but if you are thinking of getting one, you still need to order the separate mounting kit.  Well worth shopping around for these online as there was a considerable range of prices (over £100). Rainbow Conversions pricing and service was excellent. 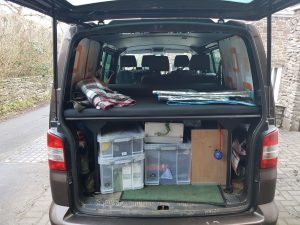 The full-width bed was bought from Exploria in Brighouse and is built specifically for Kombi’s and is useable with the rear double seat in place. It’s like a large rear parcel shelf so it’s good at obscuring the contents of the van too. 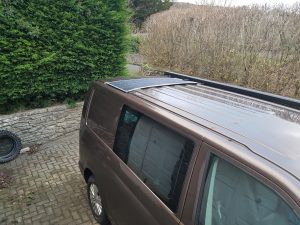 There is a solar panel now fitted and I got a flexible panel so that I could either mount it flush to the roof or make it portable. I didn’t like the idea of gluing it to the roof, so fitted it to the existing mounting holes (for roof bars).

The kit is 100W from Beam LED, with a straightforward controller and 5m of cable.  At under £200 its relatively cheap and significantly more that those marketed for VW T5/T6 (nearly £400) and won’t fit a standard T5.1 van anyway.  More of the fitting and set-up in a later article as I do need to sort out the wiring from the leisure battery. 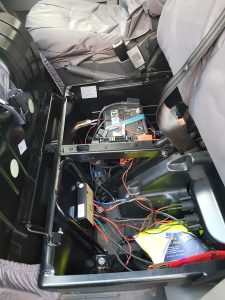 Thanks to Pete Wilmott for his services in wiring in a leisure battery under the passenger seat, which takes input via an Autosparks split charging system and also from the solar panel. This supports three 12v cigarette lighter style sockets (one of which is dedicated to a 240v inverter) and 2 USB socks, all of which are fitted into the seat base. This made it easier to wire and means it is easier then to use as a van. The fridge is the main drain on the battery, with is 90ah, which was the best size to fit directly under the seat.

The ferry to Spain is tomorrow at 11h45, but meetings for work to do beforehand, so first stop Tewkesbury.  Not quite Marrakesh yet.