Well the ferry crossing wasn’t without incident and included getting chucked out of bed by a particularly big wave a couple of hours in. Managed some sleep but given the conditions in the channel quick glad the Santander crossing was cancelled as the Bay of Biscay would have been immense. 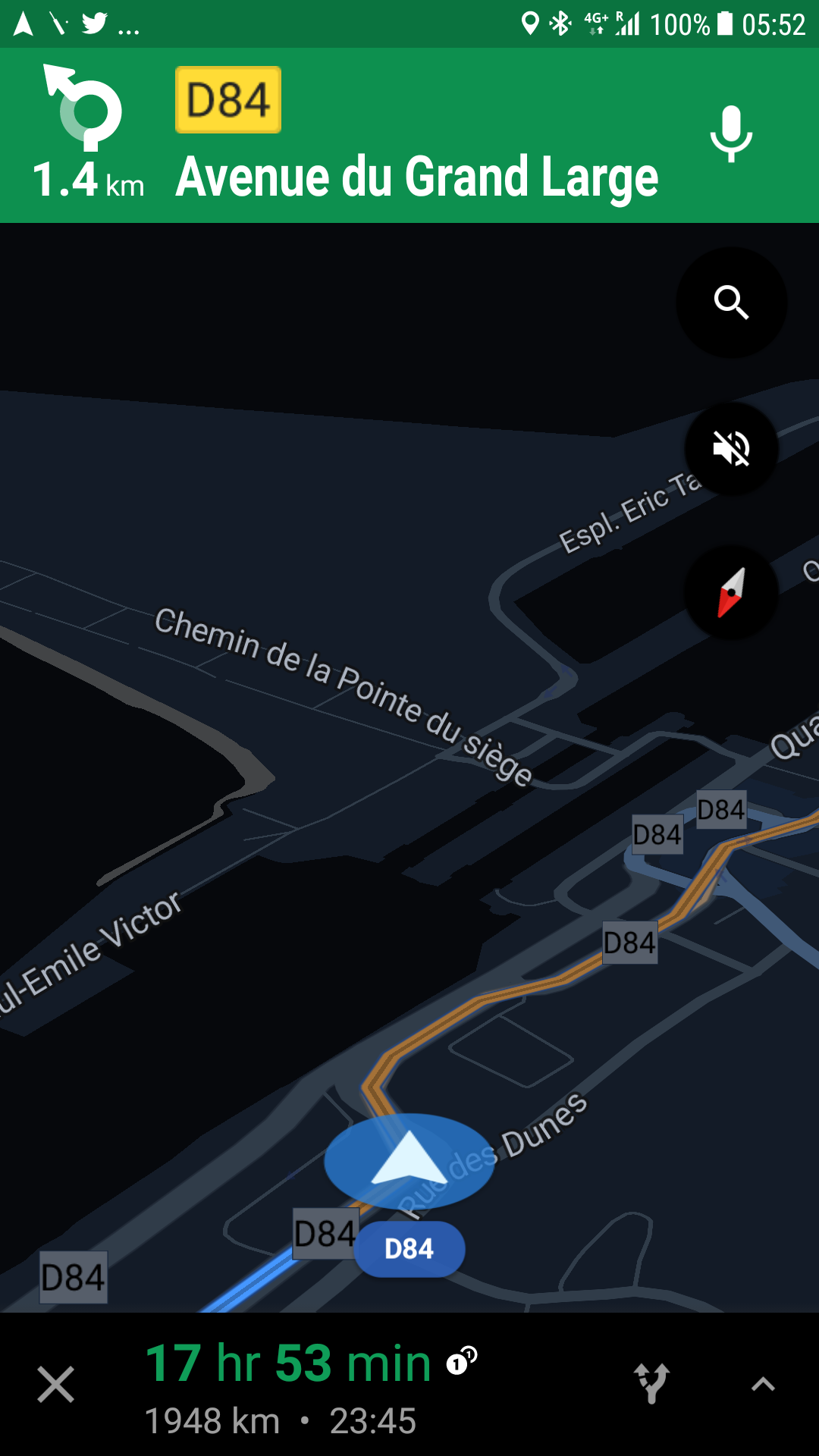 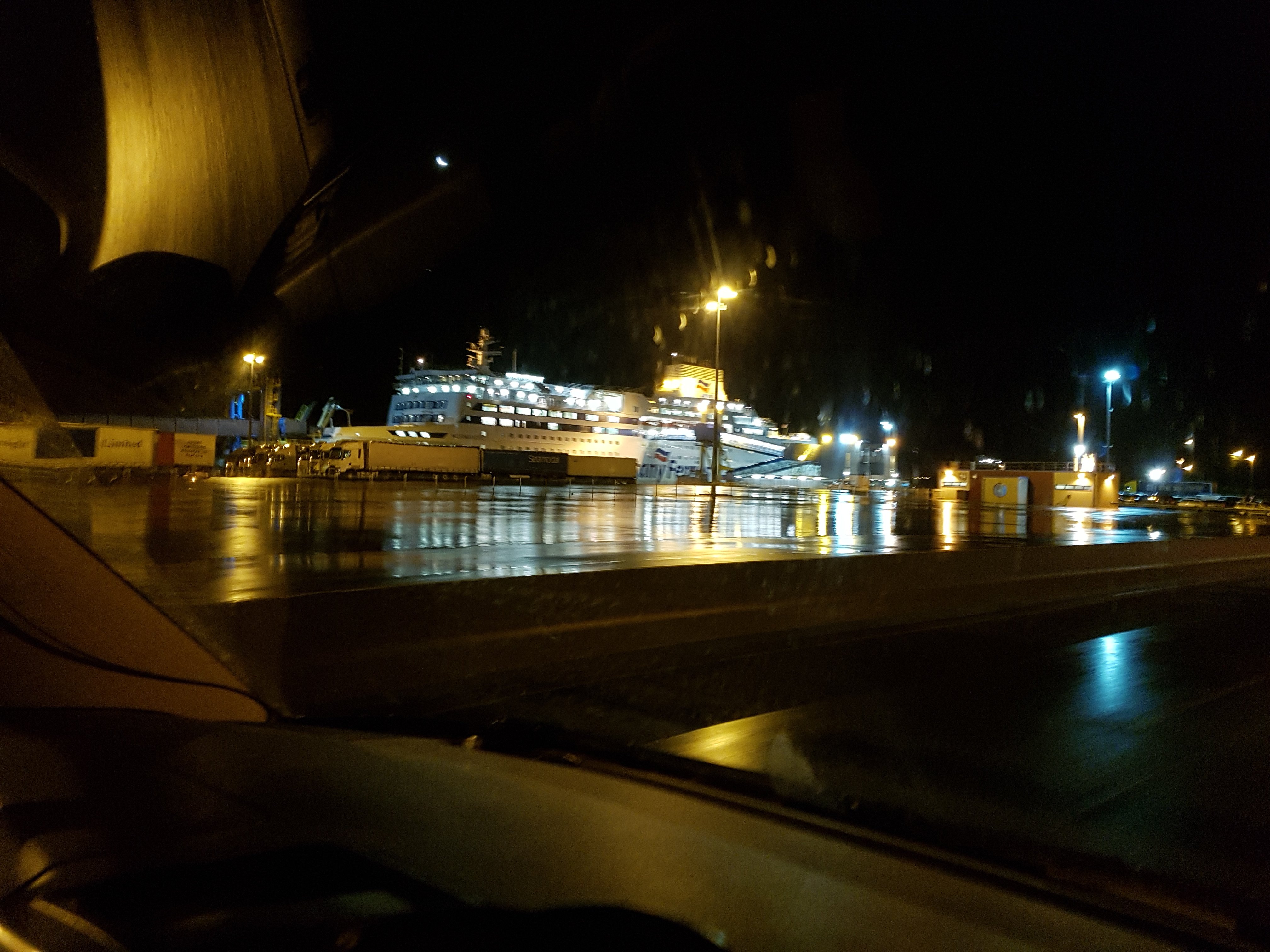 Third off the ferry which was a bit of luck and on the autoroute by 7am heading out of Caen. With Google maps showing a near 18 hour plus drive to Algeciras it was a subdued and dank start to the drive. This was compounded by me crushing my glasses in the dark teaching over to deal with the first peage of the day. The mood brightened as did the weather after chucking it down near Alencon. (Anywhere twinned with Basingstoke deserves the worst of weather). In Perth England managed not to lose a wicket for 4 hours which was great and BBC Radio Player app now broadcasts the cricket outside of the UK.

Using my Audible free trial via Amazon have a French course to do and enjoyed an hour or so of reserving a table etc in restaurant. Amazing what you don’t forget from the last lesson when 16 and from the some new tips. Only pronounce the FOR LUCK consonants at the end of words.

Took around 5 hours to Bordeaux with only a couple of breaks and had some lunch (cooked rib eye steak from Abergavenny market). Need to repack the van a bit to make it a little tidier but it’s all going in. Sun was out and it made 16 C though a strong headwind most of the way down. 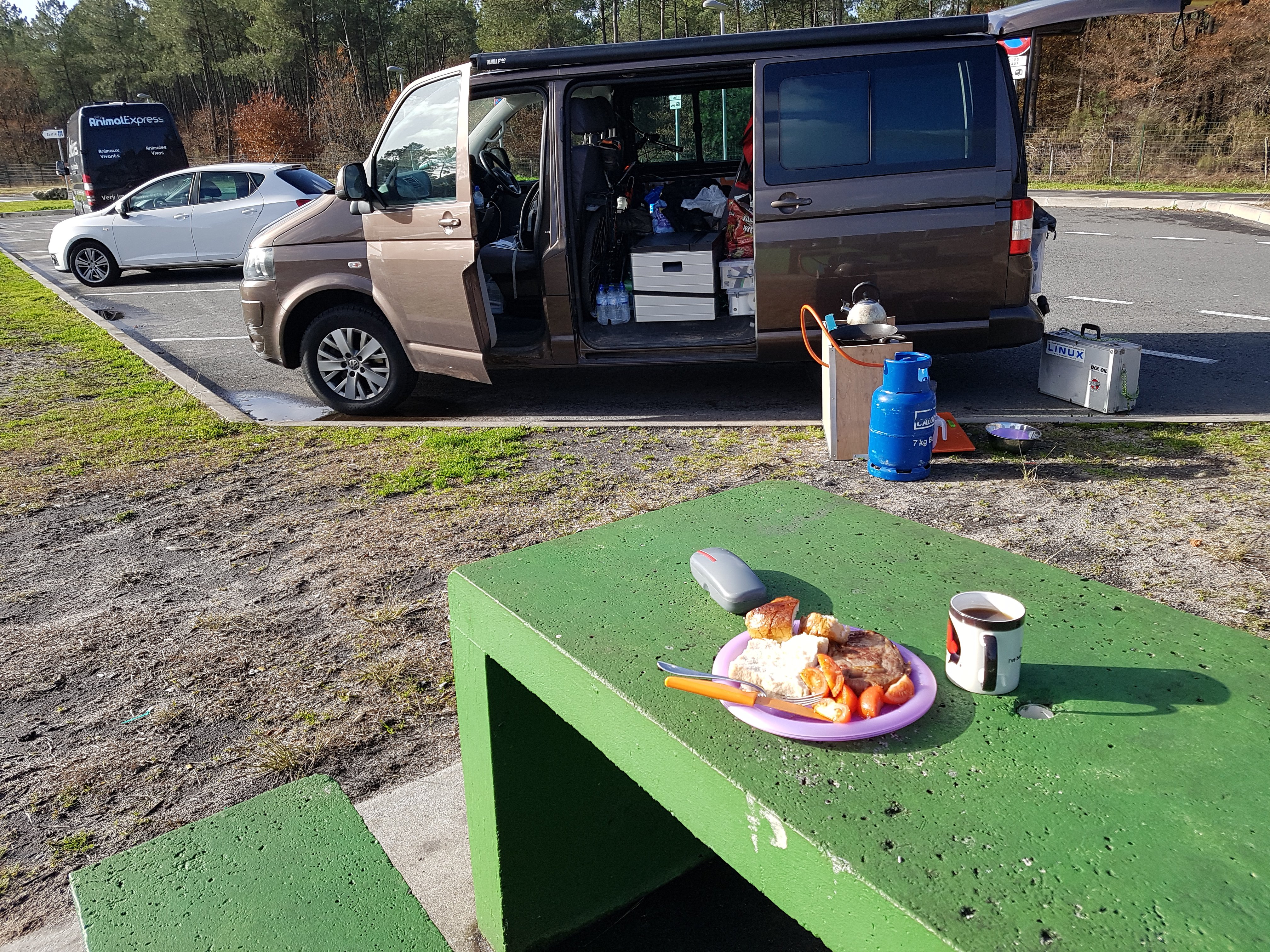 Looked at the route ahead and decided to book a cheap hotel near Burgos leaving another 4 hours of driving to do. The Basque Country scenery is great and the autovia impressive with some big tunnels and bridges. 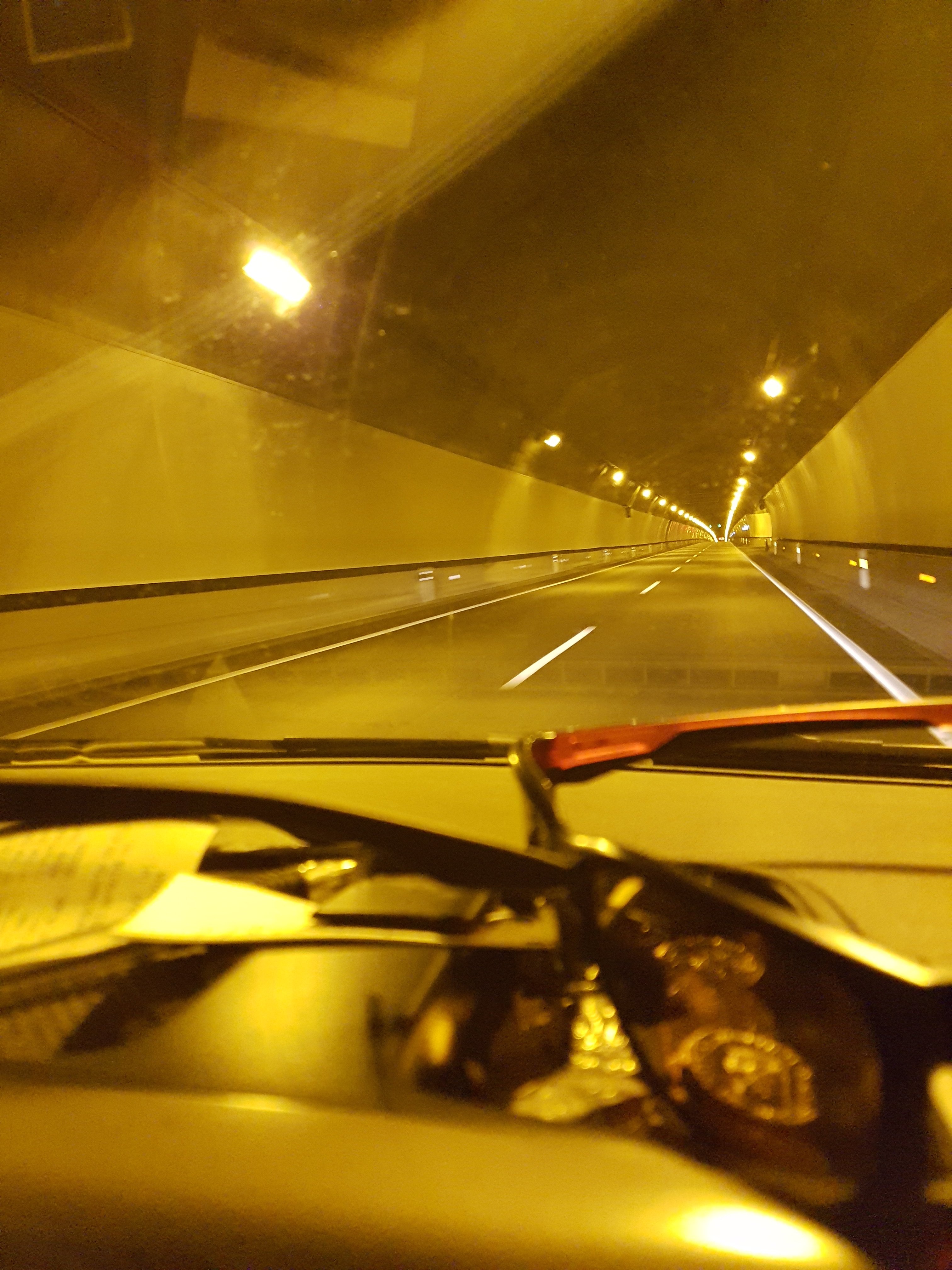 Got to the hotel just as it was getting dark and I was flagging. I do know though from experience that driving tired doesn’t mean sleep. Had a knock on the door from a neighbour who didn’t like my hamfisted guitar playing so will wait till he’s planning on sleeping to strum again. 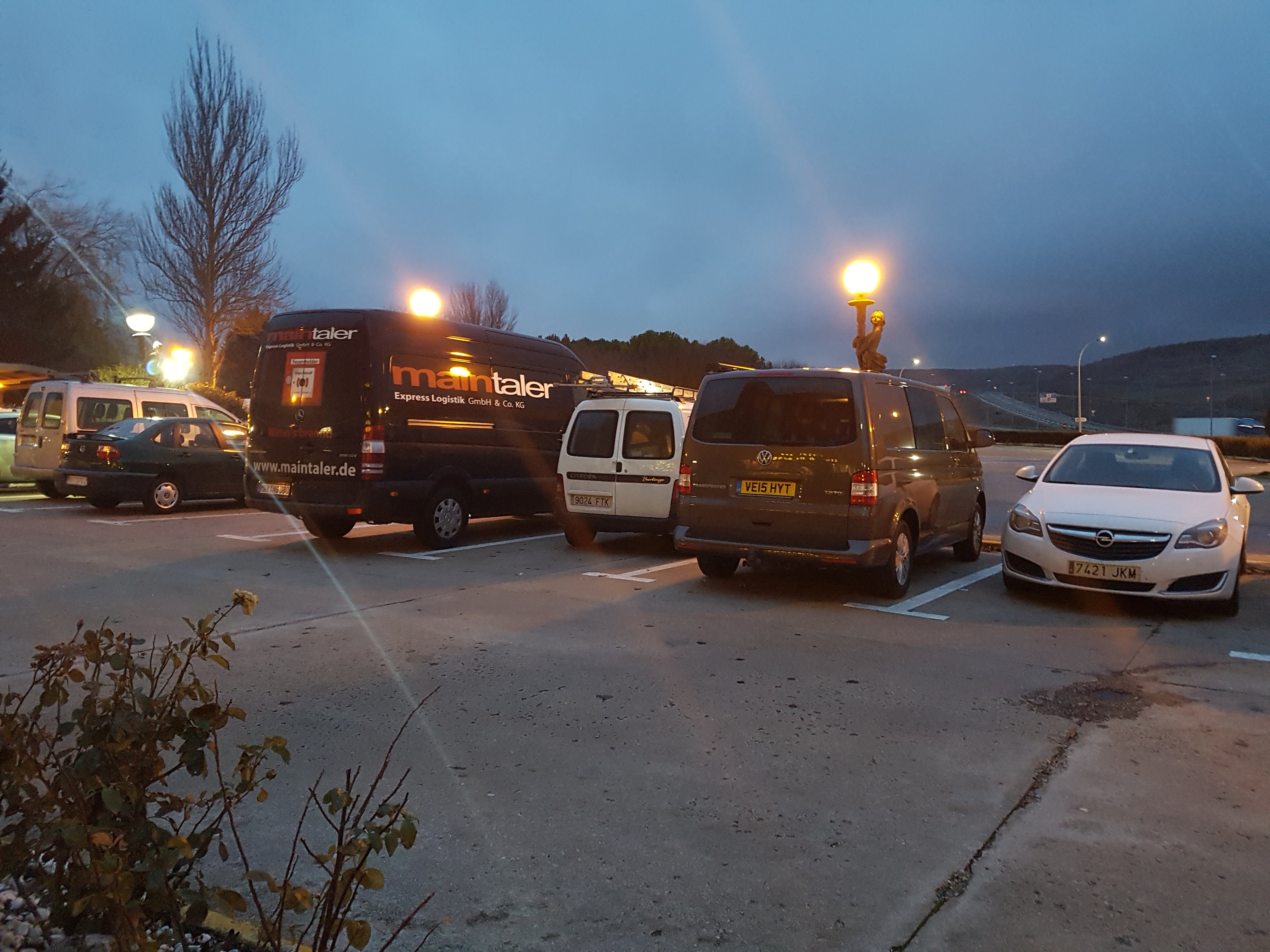 Dinner is served from 9pm and pretty sure I’ll not make it to then and another beer when I’ve written this and the joys of The Old Bike Mart to move me to sleep.

665 miles from Caen to Burgos

Given the Spanish ferry crossings are about £300, with the £20 Caen crossing, tolls and diesel, it’s £200 so it would be about the same with a normal priced crossing.

Portsmouth to Burgos via Caen across France takes 15 hours, whilst it would be 25 hours on the Bilbao ferry. Just in case you want to weigh it up.