Taroundant wasn’t what I expected, but it’s that what I had chosen as the least touristy looking town within a couple of hours.  As much as it was comfortable, in the small village of camper vans above the ocean near Taghazout, it didn’t feel right, nor the reason I’d come to Morocco. Went for a short run this morning, which caused a commotion in that someone might be fit enough and young enough to attempt running up the old piste leading up the hill. The Swiss couple in the next pitch to me had made a comment the evening before about Aourir (another nearby town) being simply smelly chaos and something they didn’t like. For sure, there’s no town in Switzerland like it and Aourir was very much for local trading rather being geared up for tourists (like Taghazout and Agadir are). 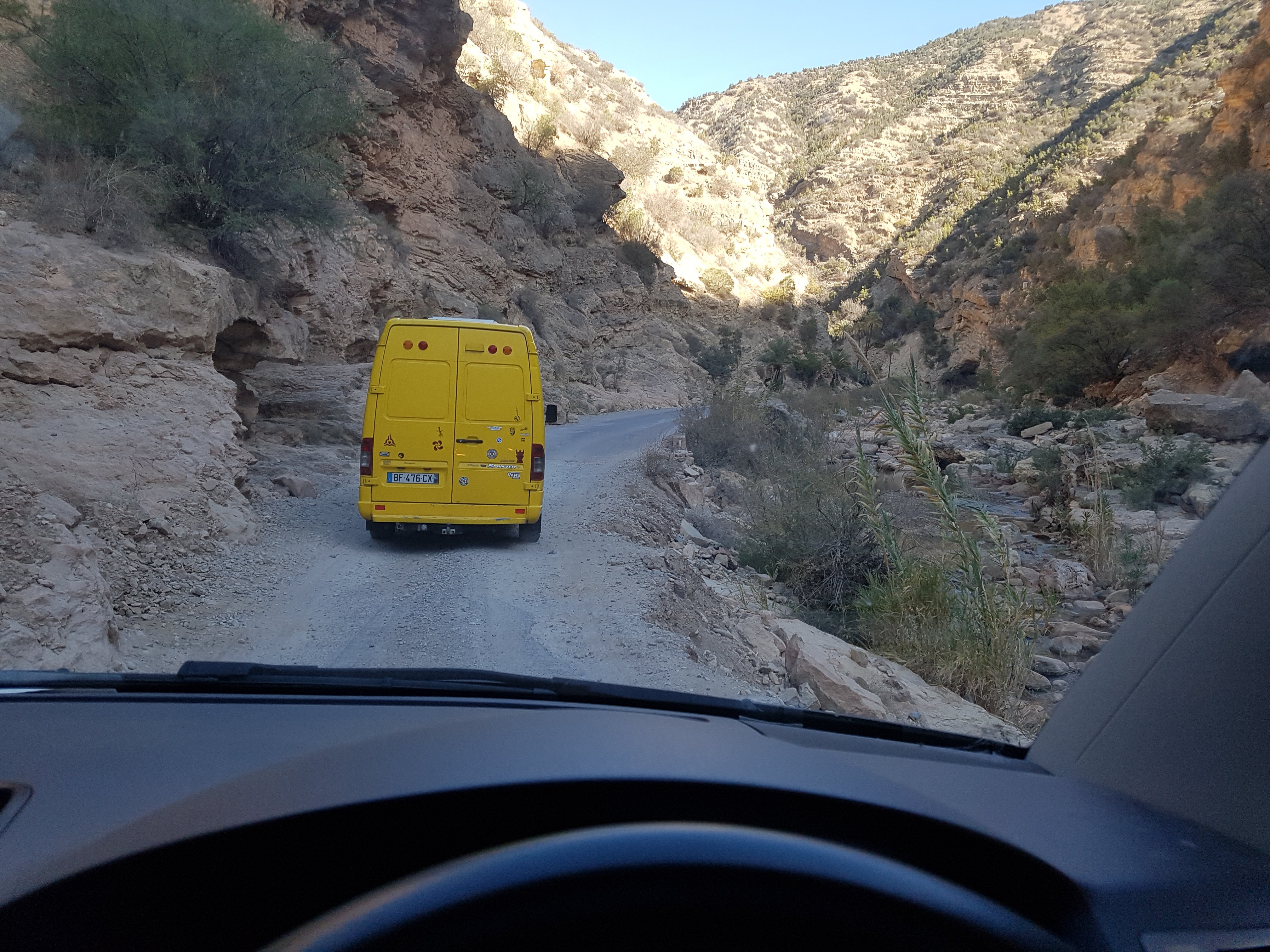 Followed a French sprinter / camper up through Paradise valley. Plenty of black smoke !

It was through the chaos of Aourir I went after a relatively late start from the campsite and headed up the road towards Paradise Valley, well touted beauty spot which is within striking distance of Agadir. As you drop into the valley, so does the quality of the road surface which has a healthy mix of tarmac and piste. It wends its way up the narrow gorge, full of palm trees and then past a parking spot for a walk up the valley. The road then climbs steeply as it heads out of the valley and across to Immouzer. It’s not a quick road, with a 25 mph average for the hour or so it took to get there. 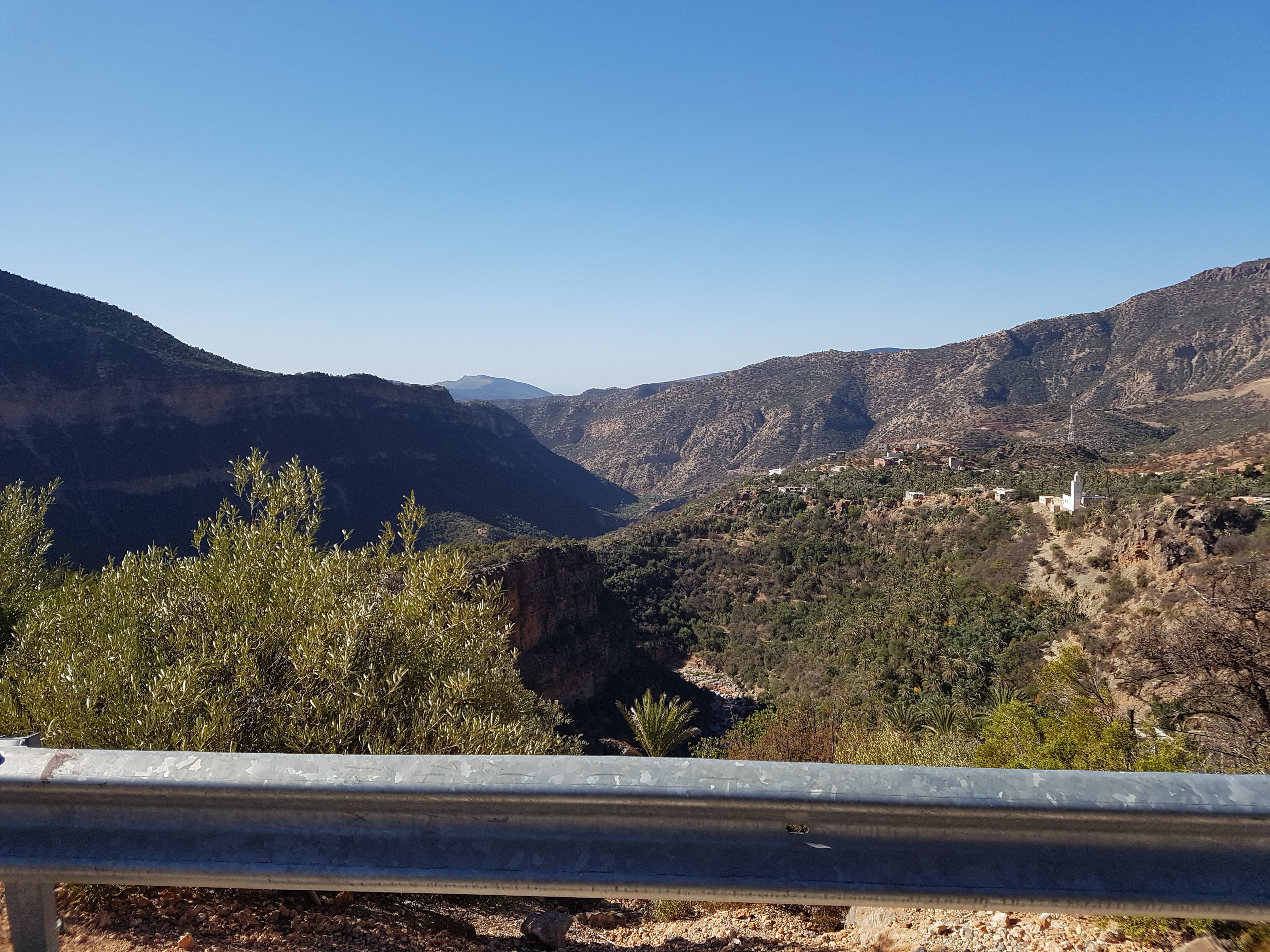 Looking back towards Aourir and across Paradise Valley

In the village you can then drop down a narrow 4km road to the base of the waterfalls and for the waiting touts and guides. I swapped one of the old mobile phones I’d brought for some marquetry (set of dominoes included) and got accosted by a guide, Ibrahim.

Now, you’ve been warned about this, but this guy was okay, spoke good english and I got a tour of the waterfalls (sans water), a tour of the village and some tea, bread and honey and some couscous. The latter was consumed sitting on the room terrace of the kasbah. Nice guy, and though you knew there was a bill coming, got chatting for a bit and even asked him to try to buy the Yamaha FS1E I’d spotted in one of the streets. Alas no joy as the local villager . In the end, I gave him 250 dirham, not cheap but fair and worth it for a tour round the village and a decent meal. I was the only tourist there and got a bit of hassle in the car park; even changed a £2 coin for 20 dirham to a guy ink. Not a bad experience even though there is this sense of being scammed a bit, they are trying to make a living and it’s not costing me a lot. 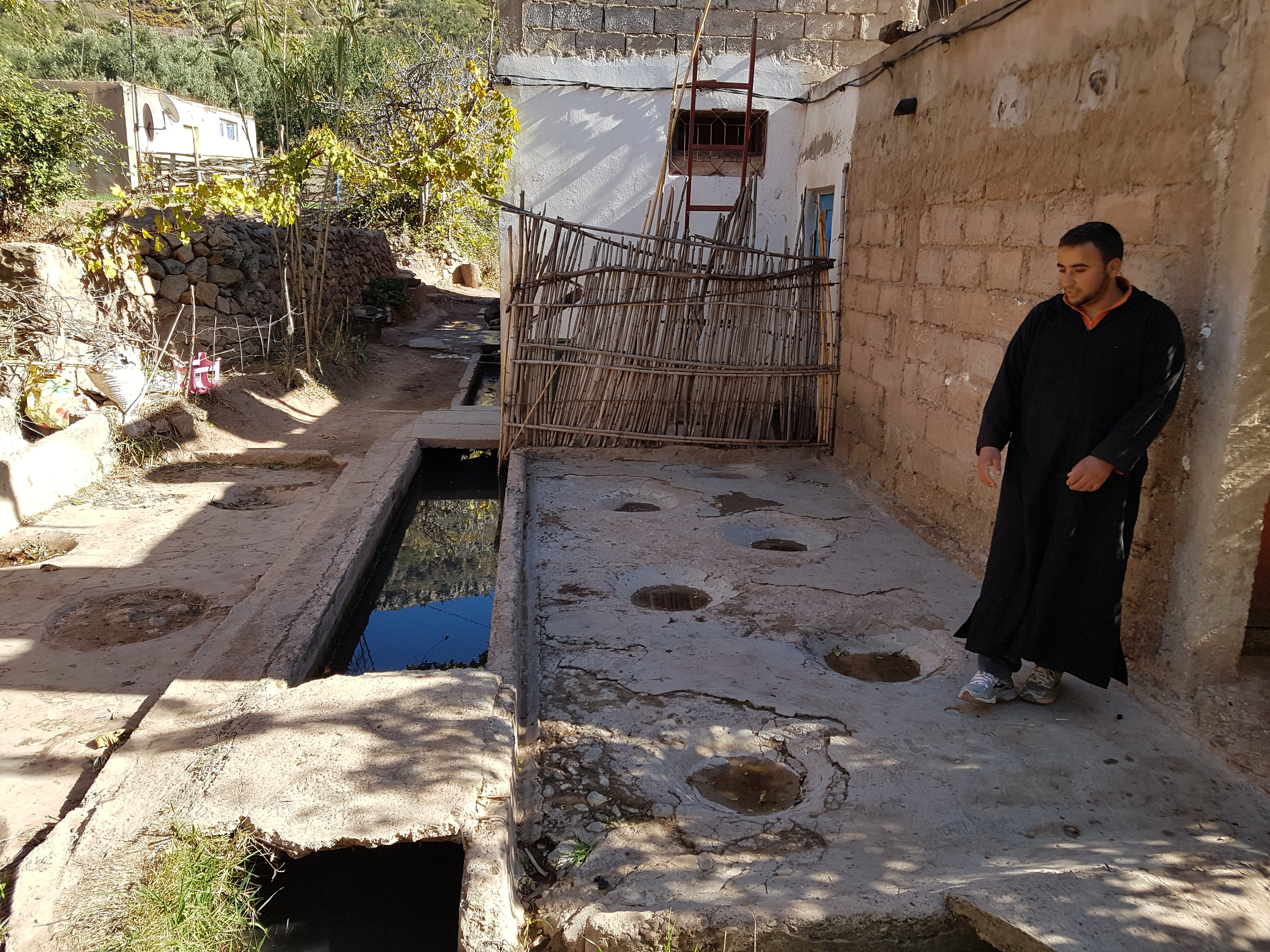 In the Berber village by Immouzer falls. No water in the falls themselves and they are waiting for the rain.

On the subject of being scammed, Blackcircles replied to my email about the order placed on my credit card; they’ve not said where the order was shipped, or if it was from my account, but I’m guess it was. As much credit card fraud as some internal failings at Blackcircles. Lets see what happens though Christmas is going to be the way. 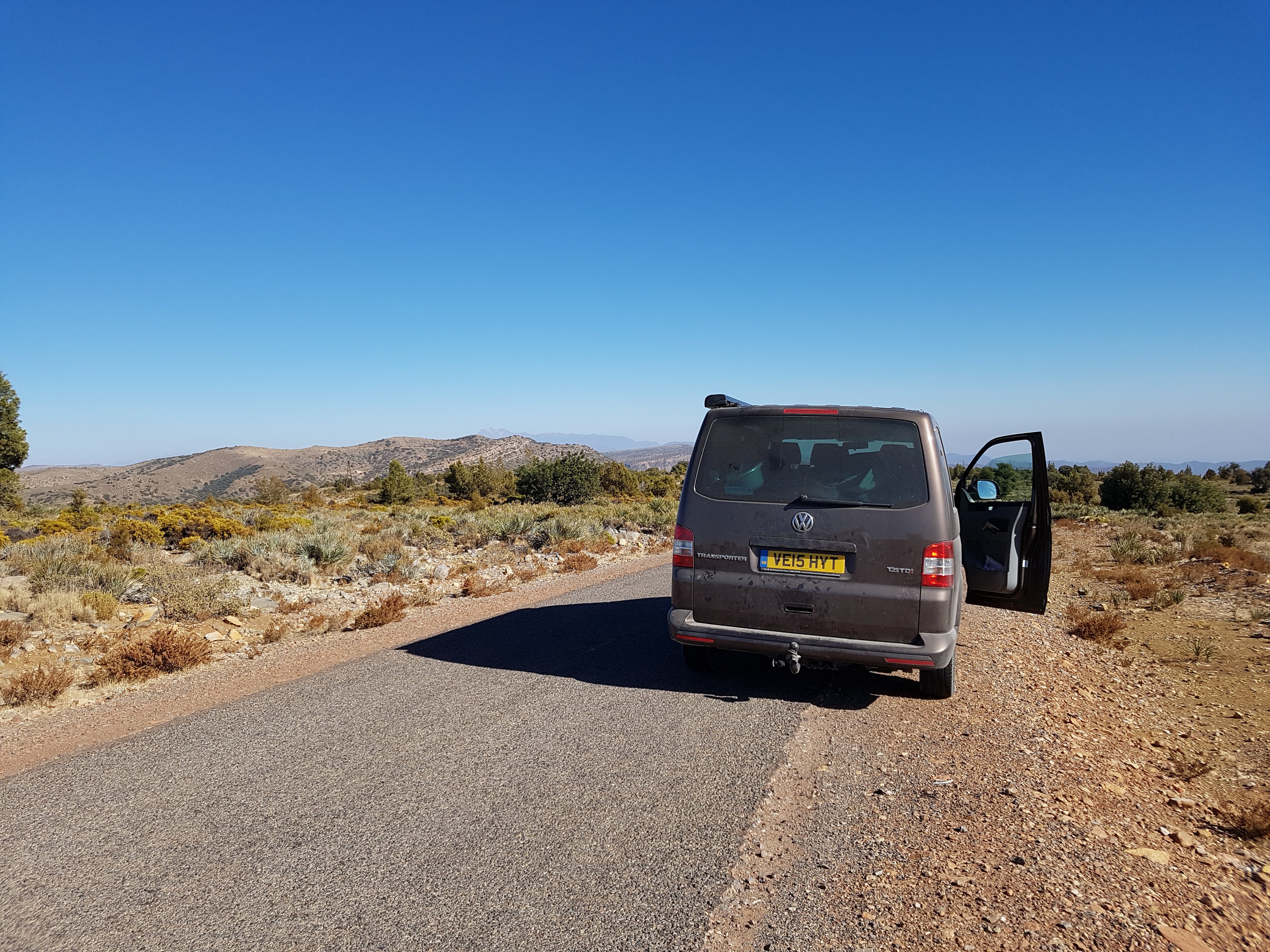 Bright but chilly coming over the top from Immouzer.

The road across from Immouzer was excellent, well surface and even some new Armco as protection against what were some pretty big drop offs on the hairpins. Temperature dropped to 12C as the van went over the top of the mountain, with some great views to the western edge of the High Atlas. I’d planned to head to Taroudant and had been a room for a couple of nights in a small Chambres d’Hote on the edge of town. Crossing the Agadir -> Marrakesh peage, got to some nice open road and headed down to the plains from the mountains, which has changed from a yellow to a red colour. Stopped for fuel at a Shell garage (again cash only), before heading the 40km or so to Taroudant. Most of this road was being resurfaced, so fairly slow going into town. Plenty of dust blown villages on the way, but Taroudant itself was a revelation. The Chambres d’Hote des Amis was hidden in a side street across from the college and I parked the van across the road on what looks a good street. 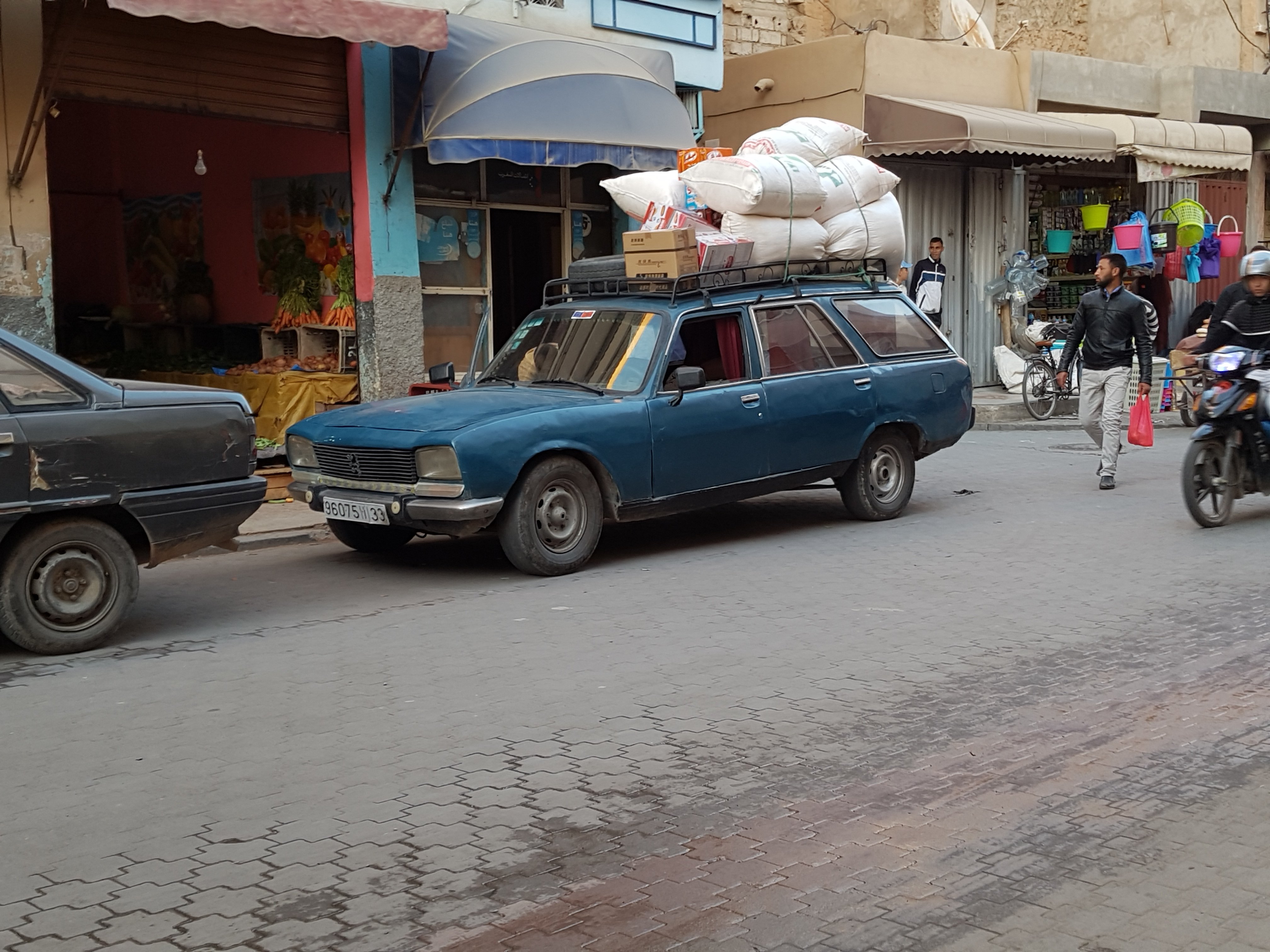 The Peugeot 504, North Africa and the Middle East still needs them.

Sayeed, the owner of the place is also a trekking guide and this might be an option for next week when Tamara is over so will try to set something up with him; he’d just come back from a couple of days trekking with some Canadians. 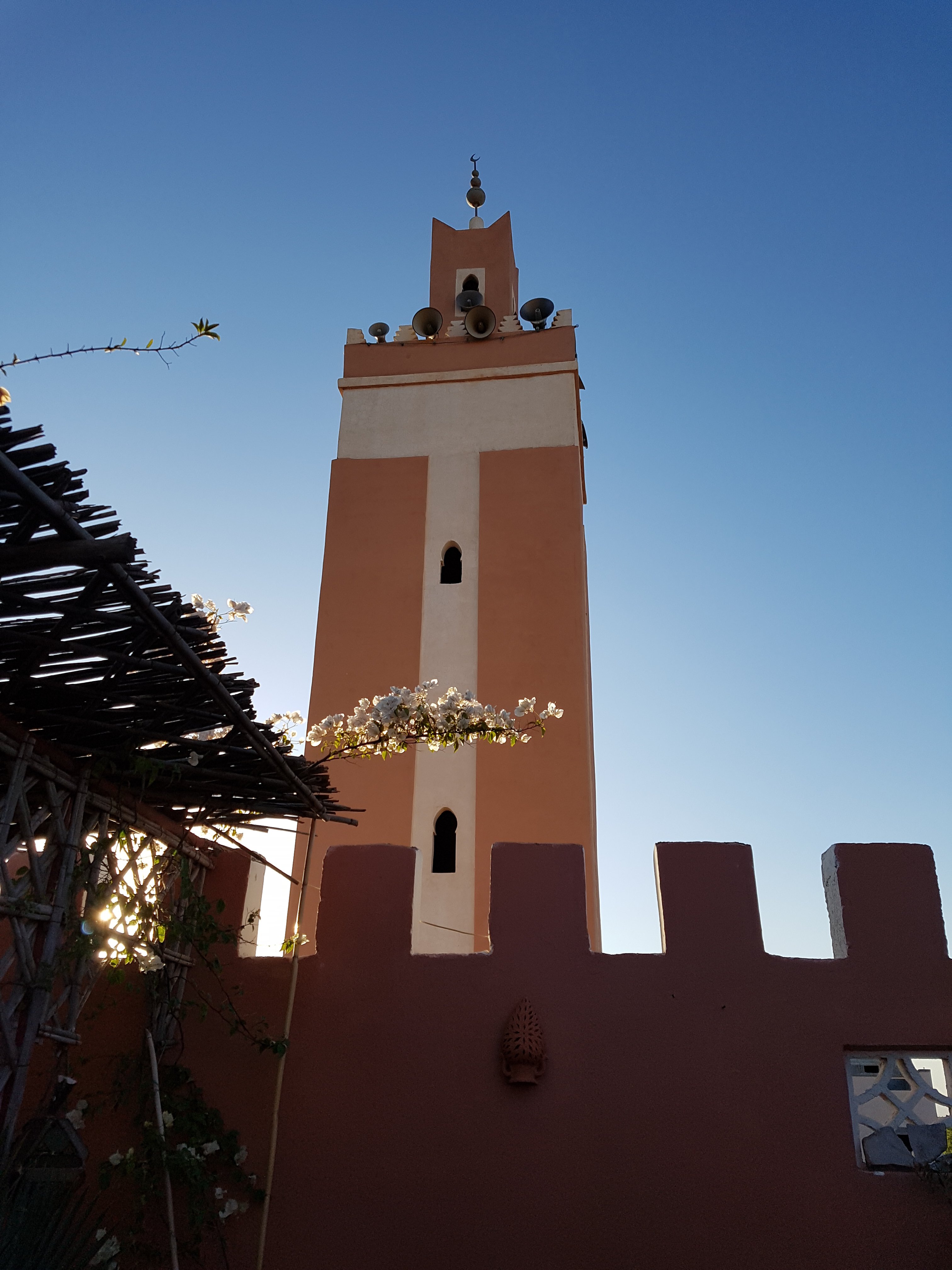 Maybe not too much of a lay in for tomorrow

Headed into town, the main part of which is surrounded by the 7km of wall with gate entrances on the main paths in; a bit like Lier in Belgium and it’s a town of 70,000 so a similar size. No beer but a great vibe in town, with plenty of shopping taking place and a lively market place in the centre as well as a covered souk. Ali mentioned that tomorrow, Saturday, there is a big Berber market with lots of villagers coming down from the mountain, so looking forward to that as plan to do tomorrow in town as well, before heading of to Tafraoute on Sunday for a few days. Need to do some reading of Shared Reality and that’s on the agenda for later this evening; update coming. One of the only issues is that the hotel is right next door to the mosque, so will get a rude awakening later I’m sure.